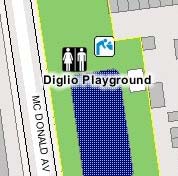 The 61-year-old Stamford, CT man accused of sexually abusing three children in two different Brooklyn park bathrooms begged for mercy as he was being apprehended, but pleaded not guilty in front of a judge. Michael Martin was arrested after allegedly molesting three children at two Brooklyn parks. After the second incident, Martin was quickly caught by civilian patrol officers at the park and begged them not to call the police. He allegedly yelled, "I know what I did! I'll seek professional help!"

Martin allegedly sexually assaulted a four-year-old boy in the restroom at Gravesend Park in Brooklyn Thursday afternoon, and then rubbed a sex toy against the boy's eight-year-old sister. When the children began crying, Martin fled. A few hours later, Martin was back at another restroom, this time in Diglio Playground in Kensington, where he asked an eight-year-old girl to touch his sex toy. The girl screamed, which alerted the civilian patrol to chase and apprehend the Connecticut molestor.

At his arraignment in Brooklyn Criminal Court, Martin was singing a completely different tune via his lawyer, who told the press "[His client] completely denies all charges." Martin gave his address as an apartment building on Main St. in Stamford, although no listing at that address could be found. According to the Stamford Advocate, Martin is not listed in a national registry of sex offenders.

#brooklyn
#children
#diglio
#kensington
#Michael Martin
#molester
#parks
#restroom
#sex toy
Do you know the scoop? Comment below or Send us a Tip