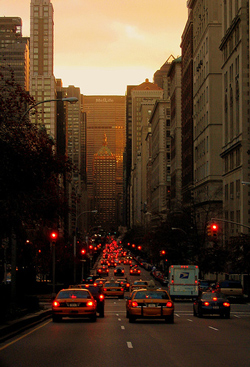 Is it possible to get a jaywalking ticket on Park Ave. north of Grand Central Terminal? We've never heard of one or seen one issued, probably because there's no Walk/Don't Walk signals at any of the intersections on the avenue between 46th and 56th Streets. Tourists hover curbside, unsure whether they're allowed to cross or not. New Yorkers who work on Park Ave. tend to blithely cross at their own risk, treating a lack of crosswalk red light as a license to proceed. Generally people have to attempt to see what the perpendicular traffic lights on the corners are signaling to figure whether crossing is allowed or not. Walkers stuck on the median have to rely on their wits, timing, and foot speed. That stretch of midtown Manhattan may soon receive signals, however, resolving a dispute that stretches back more than a 100 years.

The reason that Park Ave. doesn't have traffic signals is because the entire stretch is an artificial deck over a series of rail lines that terminate at Grand Central. Below street level, Park Ave. is a railway thoroughfare previously unattractive to anyone not interested in dealing with steam, smoke, and noise all through the day. Cornelius Vanderbilt's trains used to run at street level down Park Ave. before he was forced to construct a below-grade passage in 1871. It wasn't until 1902, following a horrific rail accident, that trains were required to be powered by electricity, eliminating the unpleasant externalities of railroads and transforming Park Ave. into an exclusive stretch of real estate.

The lack of pedestrian signals is due to the fact that the deck over Park Ave. is only 18 to 24 inches thick. The City and the MTA have been butting heads over installing proper signals for decades. Metro-North (under the control of the MTA) has long maintained that the deck over the rail lines is too thin to anchor conventional traffic lights and that any installation would puncture the rail tunnel's roof and cause flooding.. The city and the MTA have finally reached an agreement though. Lights will be installed as part of a $35 million overhaul of the streets around Grand Central, in a deal struck between Transportation Commissioner Janette Sadik-Kahn and MTA head Elliot Sander. Sander used to hold Sadik-Kahn's job before he assumed his position at the MTA and is familiar with both the city's and the MTA's position that it was the other organization's fault or necessity regarding the lack of signals.

A contractor should be hired by next September and the traffic light/ pedestrian signal installation project is expected to cost $5.7 million. That's just a few hundred grand less than the $6 million it cost Vanderbilt to sink the tracks to their current level.