by Nathan Tempey
Update below

New Jersey parents are rallying this afternoon in support of school administrators who they say have been unfairly maligned for their bullying investigation of a teen over tweets that included criticism of Israel and referred to another student. Concerned mom Adi Vaxman organized the rally for 2 p.m. this afternoon in the parking lot of Bergen County's Fair Lawn High School over what she called an "unjust bashing" by "malicious groups" and "the biased, or uninformed, media," referring to controversy around the school calling junior Bethany Koval into administrators' offices for her online activity over winter break.

Koval, who has strong political opinions and was until last week a prolific Twitter user, galvanized online Palestinian rights and free speech supporters on Wednesday after posting a series of tweets describing meetings with administrators. A few included recordings of a man she says is an assistant principal saying she may have run afoul of a state law and telling her she has a "smug attitude." During a second meeting, she says she was forced to write a statement, denied a lawyer, and threatened with a lawsuit for recording.

In a statement on Thursday, the school district's superintendent Bruce Watson wrote that his staff made no moves to censor any students, and that the probe is the result of New Jersey's strict anti-bullying law, which obligates schools to formally investigate any bullying allegation.

By that time, the school had been bombarded with calls and emails from supporters of Koval demanding that she not be punished, and in some cases referring to the school's management as "Zionist" and the investigation as "harassment." A top attorney for the ACLU of New Jersey also weighed in, saying that the anti-bullying law is flawed, that the investigation violates the First Amendment, and that an alleged warrant-less search of Koval's phone was also unconstitutional.

This criticism gets Vaxman's goat.

"As a parent, I fully support the school for doing the best that they can to keep our children safe from harm, on and off school grounds," Vaxman told Fair Lawn's Daily Voice. "I think we parents have a duty to show our support and not allow the school staff to be persecuted by the media for simply attempting to protect our children."

Students of Fair Lawn High School, stop harrassing @bendykoval. I went to FLHS not too long ago. Dont remember it being so hostile.

The announcement of a pro-school-administration protest on school grounds triggered another set of schisms, this one among parents. The animosity played out in part in the pages of Vaxman's Facebook event page, with some parents seeking to use it as a platform to defend Israel, others saying that the rally is tantamount to adults bullying a teenager, and others demanding the event be called off, saying it will make students less safe.

In one impassioned post, Vaxman attempted to fend off criticism from all corners, and keep the messaging strictly limited. She wrote:

This gathering is not political and not about freedom of speech or any other agenda. Please DO NOT bring (or wear) any other nationalities flags, political propaganda or other materials that may distract from this purpose and provoke violence of any kind. If you would like to bring a sign please make sure it only refers to supporting the FLHS and anti bullying laws and actions. [...] In this process I’ve learned some disturbing truths about some of my neighbors here in town demonstrating just how quickly peaceful people can turn into a mob. I've seen how people with political agendas ride a wave and manage to bully our school system and our entire town. I was set out to show solidarity for our town and found that we are more divided than ever, with many residents hiding behind computers typing away maliciously at their neighbors simply because they disagree with them.

What Bethany Koval was accused of doing to her fellow students - many here practice regularly. There is a very big difference between merely expressing your opinions and smearing, bashing, harassing, persecuting and threatening those who oppose them.
[...]
I am not, and will never be afraid of bullies. No amount of bashing or threats will make me stop doing what I feel is right. 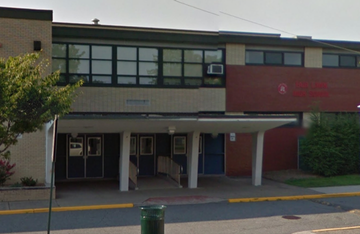 In response, one person said that Koval's actions caused students and teachers to be "harassed online by hate groups." Another wrote to Vaxman, "Please make a list of all who threatened you and give it to a couple of people you trust." Another adult pondered whether, given Koval's prolific Twitter use, she was funded by Hamas.

As far as dangers to the school go, contrary to some parents' online accounts of widespread threats, Fair Lawn Police Chief Glen Cauwels told NorthJersey.com, "There is no specific threat" against the school. "I know the school has received some comments, but they weren’t threats. They were people just voicing their opinions."

Nevertheless, Cauwels told the outlet he has increased patrols around the school.

One vaguely sinister video by a YouTube user holding up the banner of the online activist group Anonymous demanded that Fair Lawn's principal publicly apologize and take no action against Koval. Otherwise, the narrator says, "we will simply, as they say, cut the branch from the tree and cast it into the fire where it will wither and crumble into nothing...It will be you that suffers in the end."

Koval said she went home early on Thursday because of "aggression" at school. She has since made her Twitter account private.

Happening now: Depraved NJ Zionists are "rallying" at Fair Lawn High School for the persecution of a 16 y/o girl. #IStandWithBenny

A NJ.com reporter attended the rally and reported that about 100 people attended. Photos of the event are here.