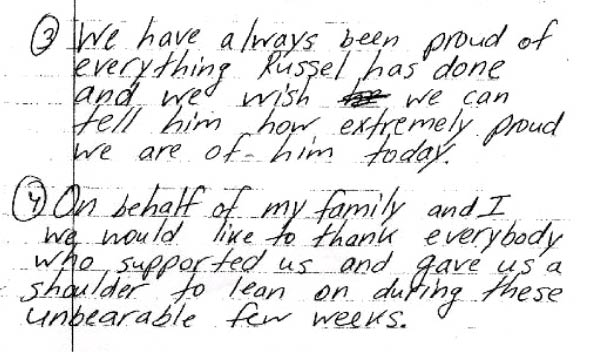 Today, the Daily News prints a heartbreaking letter from Tatyana and Leonid Timoshenko, the parents of police officer Russel Timoshenko who died after being shot on a July 9 traffic stop in Prospect Lefferts Gardens. The Timoshenkos, who immigrated to the U.S. from Belarus in 1993, thank the Kings County Hospital staff, NYPD, and "all of the people of New York and the entire nation who prayed with us." The News has a PDF of the letter here.

Yesterday, Police Commission Ray Kelly posthumously promoted Timoshenko to first-grade detective, saying, "Mr. and Mrs. Timoshenko, your son's devotion to duty, his strength and his resolve will never be forgotten by this police department. His example will stand as a monument for all of us."

And Timoshenko's partner, Herman Yan, was also promoted to detective. Commissioner Kelly noted that Yan's quick reaction by calling in their location, after he and Timoshenko were fired upon as they were approaching a stolen SUV, helped insure that the NYPD recover the suspects' car and weapons immediately.

The suspects in Timoshenko's murder have pleaded not guilty.