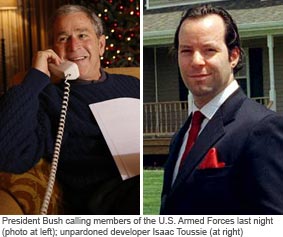 It was a Christmas Eve embarrassment! The White House had to announce that President Bush's previously announced pardon of Brooklyn developer Isaac Toussie would no longer be happening. Funnily enough, the announcement came after it was reported how Toussie's father donated tens of thousands to the Republican party and Republican politicians. Coincidence—or Christmas miracle? One homebuyer who says she was scammed by Toussie said to Newsday, "There is a Santa Claus after all. I couldn't have wished for a better present."

Toussie had been in jail for two offenses—using fake documents to get mortgages from HUD and to defrauding Suffolk County by selling it overpriced land (he used fake documents claiming bidders were offering $5 million for land worth $2.5 million). He is also facing a lawsuit from many people were apparently duped into buying overpriced, defective homes in bad areas from him. The press release stated:

With respect to the case of Mr. Isaac R. Toussie, the Counsel to the President reviewed the application and believed, based on the information known to him at the time, that it was a meritorious application. He so advised the President, who accepted the recommendation.

Which sounds like an excuse for not checking Toussie's background and his father's contributions in the first place!

What also sounds fishy is how the pardon ended up with the President in the first place: The News writes, "Stymied at the Justice Department"—since Toussie was ineligible for clemency since five years hasn't passed since his imprisonment ended—"Toussie's lawyers from the Washington power law firm Sidley Austin moved on to the White House counsel's office. The approval bypassed Attorney General Michael Mukasey and U.S. Pardon Attorney Ronald Rodgers, who would normally sign off." The NY Times reports, "The episode is particularly embarrassing for Fred F. Fielding, the White House counsel, who is mentioned by title but not by name in the White House statement." It suuure is.