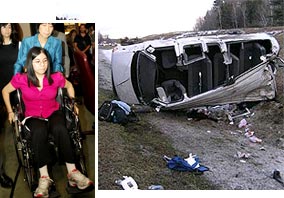 The Daily News reports that the Stuyvesant High School junior who was paralyzed from a van accident in January is suing Ford (the van's manufacturer) and NYC for $300 million.

Valerie Piro and other members of the varsity girls' track team were headed to a meet in New Hampshire. The van, driven by their coach, teacher Erin Taylor, crashed into a median and rolled over. Piro was wearing a seatbelt, but was still ejected from the van; Taylor and another student were seriously injured. It later emerged the trip was not authorized by the high school, though Taylor told her boss and received parental consent.

Piro, now heading into her senior year at Stuyvesant, is confined to a wheelchair. The News writes, "Though Valerie remains optimistic about her recovery, the rehabilitation has been long and expensive - and her injuries could be permanent." Her lawyer said the Ford 13-passenger van was dangerous, that Avis shouldn't have rented the car, and that the Department of Education should have been supervising Taylor.

#school supervision
#stuyvesant high school
#van
Do you know the scoop? Comment below or Send us a Tip
A new Gothamist is coming! We’ve moved comments over to our beta site. Click here to join the conversation and get a preview of our new website.