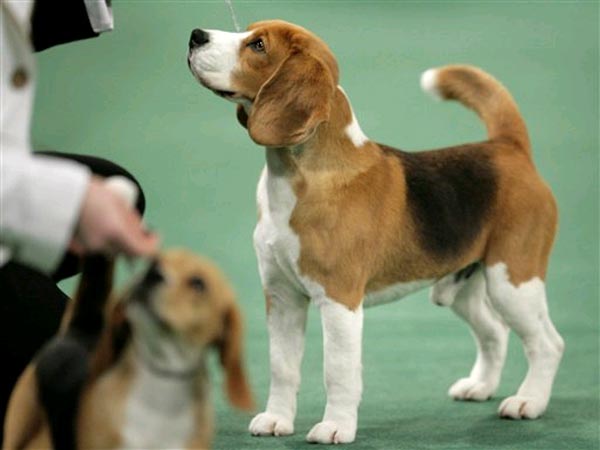 Photograph of Uno, a 15-inch beagle who won the Best in Group, by Seth Wenig/AP

It's that time of year again - the Westminster Kennel Club will be naming the Best in Show dog tonight. Today is day two (of two) of the Westminster Kennel Club's 132nd Dog show, and the best in group for the sporting, working and toy groups will be determined. Those dogs will face off against the winners of the herding (an Australian Shepherd), non-sporting (a standard poodle), terrier (a Sealhyam Terrier), and the hound (a beagle) groups.

In fact, Uno, aka Ch. K-Run’s Park Me In First, is the first beagle to win in the hound group, and his handler says Uno was ready, baying a number of times. Handler Aaron Wilkerson told the NY Times, “He bayed at the judge. He does it on his own. He’s saying to the judge, ‘Look at me.’ So he just plants his feet and bays away.”

You can see the winners by breed here. The Westminster Dog Show will air live on the USA Network tonight for Best in Show results. LVHRD is liveblogging the show and one of the bloodhounds who competed, Wimsey of the Upper West Side, has his own blog.

The Times has a multimedia guide to the four new breeds admitted to this year's show; the most newbies since '91. The Daily News talks with Patty Hearst, who is at the show with her French bulldog "Diva." And amNY has video of adorable Rachel Glenn, at 10 years old the youngest handler at the show.

#beagle
#best in show
#club
#daily news
#dogs
#news
#ny times
#patty hearst
#run
#Seth Wenig
#the daily news
#the times
#Upper West
#Upper West Side
#usa
#USA Network
#west side
#westminster dog show
#Westminster Kennel Club
Do you know the scoop? Comment below or Send us a Tip
A new Gothamist is coming! We’ve moved comments over to our beta site. Click here to join the conversation and get a preview of our new website.