It's an opportunity that only comes around once every 20 years: this November, New York voters will get a chance to decide whether or not to hold a constitutional convention, and with it, the opportunity to propose changes both sweeping and technical to the state's governing document.

If New Yorkers vote yes on a constitutional convention, an election of delegates would follow in November 2018, then the convention itself will be held in April 2019, lasting however long it takes the attendees to hash out proposed changes. Then, finally, in November 2019, the changes themselves will go up for a vote.

The convention is backed by a diverse assortment of people including good-government advocates, judges, lawyers, and activists for causes including criminal justice reform and upstate secession. It also has strident opposition from what to some might be a surprising source: major unions including the Service Employees International Union and the United Federation of Teachers.

Where earnest reformers see an opportunity to push through big-ticket items such as marijuana legalization, ethics reforms, a right to clean air and water, and giving New York City control of its schools and roads, major unions are telling their members that there is the risk of the convention being used by corporations and conservatives to roll back worker protections.

A blurb to UFT members in the union's January newsletter reads, "A constitutional convention is unlimited in the scope of what it could change. This would place New York State’s rights and protections at risk of alteration or elimination, including the guarantee of a free public education, a prohibition against aid to non-public schools and the right to Workers’ Compensation."

Indeed, the current workers' comp system is a feature of the state constitution, and a proposal to allow private schools to use state funds came out of the 1967 constitutional convention, the last one New York held. The 1967 convention was called by the legislature—legislators can call for a convention to be voted on during off years—and voters rejected a raft of proposed amendments that came out of it, in large part because of the private school issue.

What the teachers union doesn't note is that other protections it warns could be affected, such as the right to unionize, are enshrined in federal law, and some crucial ones came out of this very state convention process. New York's workers' comp, for example, was a product of the 1938 convention, the last one called by New York voters.

Separately, the "forever wild" protections preserving the forests of the Catskills and the Adirondacks came out of the 1894 convention.

"It's very safe and very easy to say no and not take any risks," said Brandon West, vice president of policy for the reform-minded New Kings Democrats, who want a convention. "No one is saying this is a zero-risk campaign. But every political campaign that's ever been done that's worth doing has involved some degree of risk, and we think the risk is definitely worth it here."

Also, convention advocates note, any proposed amendments that unions find objectionable would, if they made it through the convention process, face final judgment by voters before becoming law.

A constitutional convention last appeared on the ballot in 1997. Weeks before the vote, polls showed a large majority in favor of holding the convention. But following a concerted last-minute advertising and phone-banking effort by unions, voters turned it down. 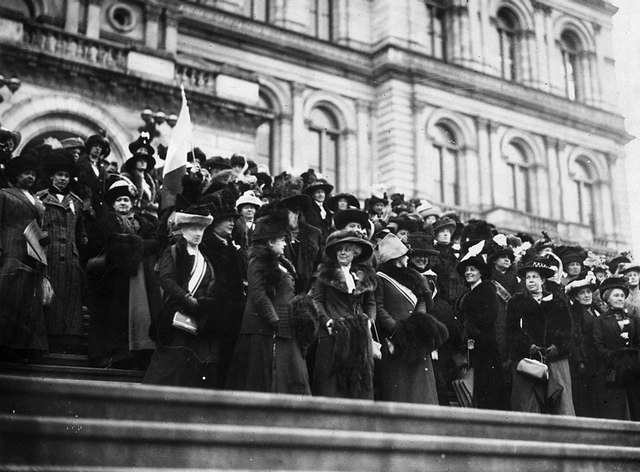 Suffragists won the right for women to vote in New York in 1917 via a ballot referendum, the other avenue for constitutional amendments, requiring the approval of two successive legislatures and then voters. (Paul Thompson/Getty)

Gerald Benjamin, a political science professor and administrator at the State University of New York New Paltz, has long supported the idea of holding a constitutional convention. He said the major unions' opposition has taken the form of "a scare tactic," in 1997 and today. This time around, he said that he hopes the response to the recent presidential election will galvanize people who otherwise might not be engaged in the minutia of state politics.

"New Yorkers need to push a reset button. Our fundamental cynicism and withdrawal from government as evidenced by our low voting participation needs to be addressed," he said. "And this time, where there are opportunities, where people are mobilized, we need to say to the people, 'Okay, we're going to give you a chance to elect a different group of people oriented to how you govern yourselves, just as was intended in 1846 when this was done, and we are going to give you an alternative to what you have now.'"

Already, he said he has "people calling me from everywhere wanting to help." Those callers include people dejected about Bernie Sanders's primary loss, and about Donald Trump's victory. Personally, Benjamin said he would like to see something about access to public higher education addressed in the state constitution.

Another group with a rosy view of the prospect of a constitutional convention is the New York State Bar Association. Early this year, the group representing some of the state's most prominent lawyers and judges released a 72-page report outlining constitutional issues that make the state's courts, in its words, "overly complex, unduly costly and unnecessarily inefficient."

The opposition of the large unions comes from their entrenched position in the current legislative system, Benjamin said.

"Much of the big money in New York is union money," Benjamin he explained. "So the money here is complaining that money from somewhere else will come in and be dominant."

Of course, corporations such as real estate developers that are none too enamored of union protections represent another huge source of New York political contributions, and billionaire apocalypto-libertarian family the Mercers, architects of Trump's recent victory, are working to influence state politics through the group Reclaim New York. (Reclaim New York, for what it's worth, is holding off on backing a convention short of legislators taking a pledge that they won't run to be convention delegates, and says even that isn't a guarantee of support.) Faced with this dynamic, some progressives are still going against organized labor on this issue, awkward as it may be.

Someone called me a Bernie bro. I was having a conversation about reforming the Democratic Party with this woman who lives in Westchester. It was going great, and then I mentioned a constitutional convention. She was like, "Oh, you're some kind of Bernie bro?" That blew my mind. That's a deep cut in so many ways. I was like, "What do you mean? I am not some manarchist dude-bro who's going to vote for Trump because Bernie didn't win."

Clearly, there is some work to be done on the public relations front. 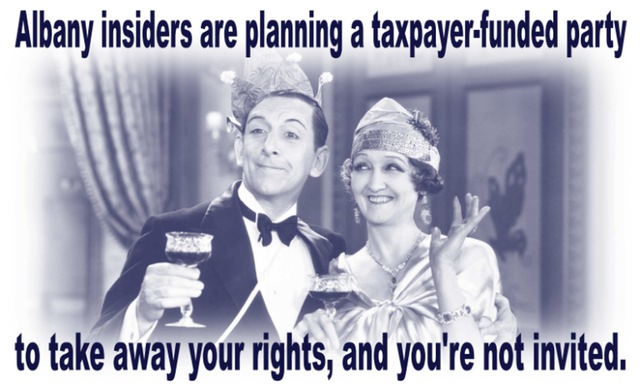 Large New York unions are already pushing messaging like this about the constitutional convention vote out to their members. (AFL-CIO)

West acknowledged that the big unions have major firepower—the UFT-allied New York State United Teachers alone has 600,000 members, and the state AFL-CIO, with 2.5 million members, is already calling a convention a "boondoggle for politicians and corporate lobbyists to take away your wages, benefits and rights." But West said that newer grassroots political networks such as Black Lives Matter activists and the organizers of the Women's March NYC can get the word out. What's needed, he said, is a "guerrilla warfare kind of method to try to communicate with different groups," including to workers whose unions are opposed to a convention.

In addition to organized labor, convention supporters will have to get through what a public relations representative for the UFT says is a nascent coalition of conservatives, conservationists, and civil libertarians.

"Under the current process, proxies for the powerful will continue to run the show and advance their own interests over those of hardworking taxpayers," New York Civil Liberties Union director Donna Lieberman said in an emailed statement. "It is sham democracy in action, and New Yorkers are not going to fall for it."

Governor Cuomo has emphasized his support for a convention in state of state addresses this year and last. But $1 million for a preparatory commission that he promised in 2016 didn't make it into the budget. This year, he called for Roe v. Wade's abortion rights protections to be protected at the state level via a constitutional amendment, but his advocacy for a convention has gone quiet as the November vote approaches. Mayor de Blasio, Cuomo's perennial foe, has taken the opposite position, predicting that a convention will bring "unfettered spending by powerful forces" and concluding, "I just don't think that's worth the risk."

Just 24 percent of registered voters delivered de Blasio his 2013 electoral victory, and so, whether or not one is held will likely rest on a fraction of eligible voters in New York. The state's restrictive voter registration system, another issue reformers want to revamp at a convention, will close the door to some who realize too late that they want to participate.

Activists seeking to get out the vote for this wonky once-in-a-generation opportunity face an uphill challenge.

A recent Siena College poll showed that 62 percent of those polled were for holding a constitutional convention. Encouraging, right? Well, 67 percent also said they've heard "nothing at all" about a convention.