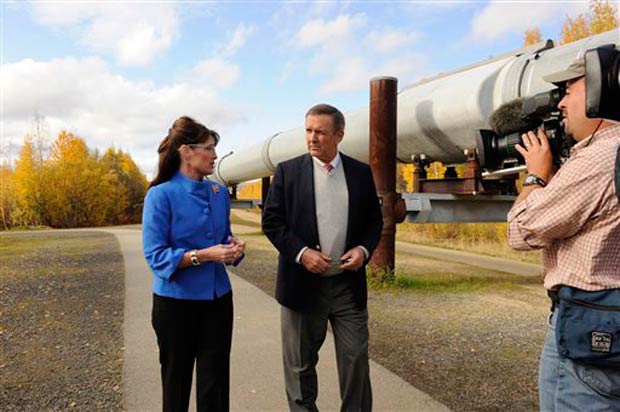 Republican vice presidential candidate Sarah Palin had her first big (elitist?) media interview yesterday. The McCain-Palin camp selected Charlie Gibson of ABC News to conduct it, and ABC News spread the footage out between World News Tonight, Nightline, Good Morning America and 20/20 over last night and today. She told Gibson that she's "ready" to serve the country and did not hesitate when John McCain asked her to be his running mate, "I answered him yes because I have the confidence in that readiness and knowing that you can't blink, you have to be wired in a way of being so committed to the mission, the mission that we're on, reform of this country and victory in the war, you can't blink."

Overall, the consensus is that Palin seemed poised and confident--though she gave canned responses. Per the NY Times, "At times visibly nervous, at others appearing to hew so closely to prepared answers that she used the exact same phrases repeatedly, Ms. Palin most visibly stumbled when she was asked by Mr. Gibson if she agreed with the Bush doctrine. Ms. Palin did not seem to know what he was talking about. Mr. Gibson, sounding like an impatient teacher, informed her that it meant the right of 'anticipatory self-defense.'"

Below is video of a 10 minute segment of the interview, and the Washington Post's Howard Kurtz also delves into her appearance and looks at some of the other critiques. Kurtz believed Gibson did a good job, but the Daily News' David Hinckley was disappointed. He says that while Palin and ABC got what they wanted, but viewers are losing out, in the way that ABC conducted the interview in a number of segments with Palin (inside while sitting, outside while walking): "That diluted the conversation and made it harder to start getting a fix on this mystery woman who could soon acquire life-and-death powers." That'll be tough, as the McCain-Palin camp is making sure she campaigns more often with McCain than not.

Some notable things from the interview: She emphasized she wouldn't second-guess Israel, says the U.S. should take on Russia if it invaded Georgia again (if Georgia were in NATO, which she supports), and now says some man-made activities contributed to global warming. Politico has a roundup of some pundits' thoughts--some loved it, some are scared. Earlier in the day, when addressing her son's Iraq-bound squad, the Washington Post reports she linked the September 11 attacks to Iraq--"a view once promoted by Bush administration officials, has since been rejected even by the president himself."

#abc news
#charlie gibson
#interview
#sarah palin
Do you know the scoop? Comment below or Send us a Tip