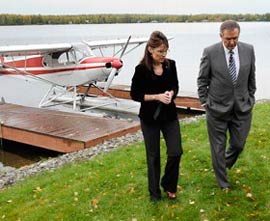 In Day 2 of the Sarah Palin Interview on ABC, the Republican vice-presidential candidate touched on a number of topics--abortion, earmarks, and Hillary Clinton.

Yes--she's bringing up Clinton again, telling ABC's Charlie Gibson that Barack Obama might have second thoughts about his vice presidential pick, "I think he's regretting not picking her now, I do. What, what determination, and grit, and even grace through some tough shots that were fired her way -- she handled those well."

Tough shots like the ones Palin herself made (see video 2 here)! On behalf of the Obama campaign, Representative Debbie Wasserman-Schultz said, "Sarah Palin should spare us the phony sentiment and respect. Governor Palin accused Senator Clinton of whining," (see video 2 here). Of course, maybe Biden's gaffes are giving Obama pause, but the Democratic presidential candidate did tell David Letterman he thinks Joe Biden's the right person for the job.

As for the rest of her interview, Palin explained she'd support abortion if the mother's life is in danger, she is still against stem cell research, and she insisted she killed the Bridge to Nowhere (though she had supported it). The Chicago Sun-Times runs down the areas where Palin seems confused.

And the AP makes a point of reporting how John McCain, when on The View yesterday, "stood by two of his campaign commercials — one which said Obama favored comprehensive sex education for kindergarten students and another that suggested Obama had called Palin a pig. Both are misleading and factually inaccurate." The AP also outlined how McCain has changed:

McCain looked irked when [View co-host] Behar asked him whether he had jettisoned his independence as a candidate by appearing to be in "lock step" with President Bush's policies.

"What specific area have I, quote, 'changed?' Nobody can name it," McCain said.

McCain has changed positions on significant issues. For example, he once opposed Bush's tax cuts but now supports making them permanent. He had opposed lifting the ban on additional offshore oil exploration but now calls for drilling off the U.S. coast. He had been against mandatory caps on greenhouse gas emissions but now favors them.