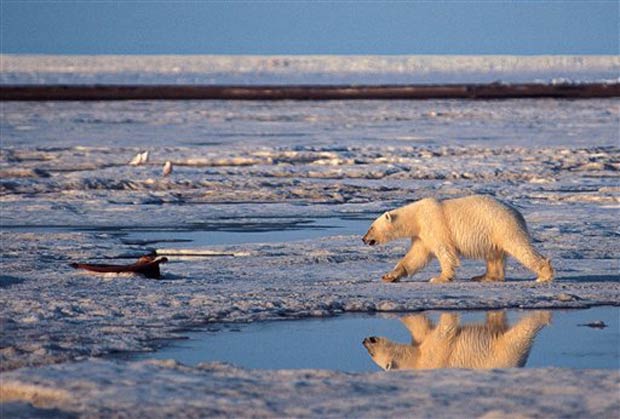 The NY Times article about the Republican vice presidential candidate's governing style begins, "Gov. Sarah Palin lives by the maxim that all politics is local, not to mention personal." It details how she hired many friends for state positions, turns against friends or supporters if they criticize her, and created an atmosphere of intense secrecy as governor.

Here are two excerpts from the lengthy Times article. First, a little something about Palin and polar bears:

Rick Steiner, a University of Alaska professor, sought the e-mail messages of state scientists who had examined the effect of global warming on polar bears. (Ms. Palin said the scientists had found no ill effects, and she has sued the federal government to block the listing of the bears as endangered.) An administration official told Mr. Steiner that his request would cost $468,784 to process.

When Mr. Steiner finally obtained the e-mail messages — through a federal records request — he discovered that state scientists had in fact agreed that the bears were in danger, records show.

“Their secrecy is off the charts,” Mr. Steiner said.

Then, there's Palin's habit of using her private e-mail address for state work:

While Ms. Palin took office promising a more open government, her administration has battled to keep information secret. Her inner circle discussed the benefit of using private e-mail addresses. An assistant told her it appeared that such e-mail messages sent to a private address on a “personal device” like a BlackBerry “would be confidential and not subject to subpoena.”

Ms. Palin and aides use their private e-mail addresses for state business. A campaign spokesman said the governor copied e-mail messages to her state account “when there was significant state business.”

On Feb. 7, Frank Bailey, a high-level aide, wrote to Ms. Palin’s state e-mail address to discuss appointments. Another aide fired back: “Frank, this is not the governor’s personal account.”

The Washington Post also examines Palin's mayoral legacy today, finding, "Palin limited her duties further by hiring a deputy administrator to handle much of the town's day-to-day management. Her top achievement as mayor was the construction of an ice rink, a project that landed in the courts and cost the city more than expected."

Palin herself said of mayoral position, "It's not rocket science. It's $6 million and 53 employees."