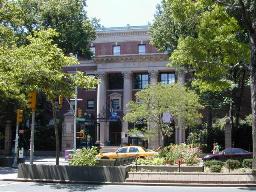 Take a Palestinian professor with a critically praised and questionable book about Middle Eastern archeology and add her desire for tenure at Barnard College, and you have a big headache for school administrators. The NY Times notes that Nadia Abu El-Haj's tenure bid is yet another instance of the "struggle over scholarship on the Middle East" at Columbia University.

Barnard officials have already approved tenure for Abu El-Haj, an assistant professor of anthropology who has been a Fulbright Fellow and recipient of many awards, but Columbia gets the make the final decision. Abu El-Haj's book, "Facts on the Ground: Archaeological Practice and Territorial Self-Fashioning in Israeli Society," was both acclaimed and criticized. The Times described the book:

In her book, which grew out of her doctoral research and was published by the University of Chicago Press in 2001, Dr. Abu El-Haj says Israeli archaeologists searched for an ancient Jewish presence to help build the case for a Jewish state. In their quest, she writes, they sometimes used bulldozers, destroying remains of other cultures, including those of Arabs.

She concludes her book by saying the ransacking by thousands of Palestinians in 2000 of Joseph’s tomb, a Jewish holy site in the West Bank, “needs to be understood in relation to a colonial-national history” of Israel and the symbolic resonance of artifacts.

A 1982 Barnard graduate, Paula Stern, started a petition to protest Abu El-Haj's tenure, saying that she misrepresented data. Another Barnard professor, Alan F. Segal, told the Times, "There is every reason in the world to want her to have tenure, and only one reason against it — her work," calling her work "not good enough" and says, "She is so bizarrely off.” He also claims Barnard asked him for non-Jewish professors to comment on Abu El-Haj's work.

But she does have supporters, who feel she is targeted because she is Palestinian-American. Michael Dietler, a University of Chicago professor, said, "She is a scholar of the highest quality and integrity who is being persecuted because she has the courage to focus an analytical lens on subjects that others wish to shield from scrutiny and because she happens to be Palestinian."

Back in 2004, some Columbia students accused some professors of humiliating and intimidating them while discussing Israeli politics in the Middle East and creating an inhospitable environment for Jewish students. As Columbia struggled to deal with the heated debate, one professor even said that student-professor tensions were "blood sport" and that he enjoyed it. Eventually, a university study found that Columbia was not anti-Semitic, but it did lack a way to process student complaints about professors.