A 65-year-old found herself $28,000 poorer after a run-in with two scammers earlier this month. Apparently they told her they needed to see her cash before they could trust her with a charitable donation.

The incident began in East Flatbush, on the corner of Church Avenue and Nostrand Avenue, on May 11, just before noon. According to the NYPD, the victim, a 65-year-old woman, was approached by an unidentified woman who started talking to her about a "sizable charitable donation that the unidentified female claimed she could not make herself." Then an unidentified man joined the discussion, and the unidentified woman said "that she wanted verify that the victim had financial means before entrusting her with money for the alleged donation." 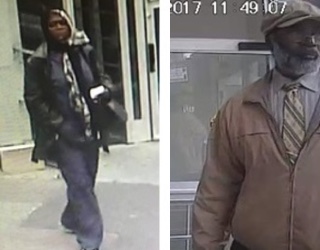 The victim, police say, agreed, and they went to the victim's home near New York Avenue and Snyder Avenue, where the victim took $28,000 in cash from her home and gave it to the strangers who were waiting in a car. Apparently, the victim was told that the cash would be blessed. The victim left the car with a bag that allegedly had her $28,000 plus the donation, and the pair left.

When the victim got to her lobby, she looked inside the bag and found it full of shredded newspaper.

The NYPD released images and video of the suspects, who are both described as a being around 50 years old. They are wanted for grand larceny.

The scam appears to be a variation of the pigeon drop con; in a pigeon drop, a grifter claims to have something of great value but then requires a victim to put up some of their own money as collateral.

#brooklyn
#grand larceny
#pigeon drop
#scam
Do you know the scoop? Comment below or Send us a Tip