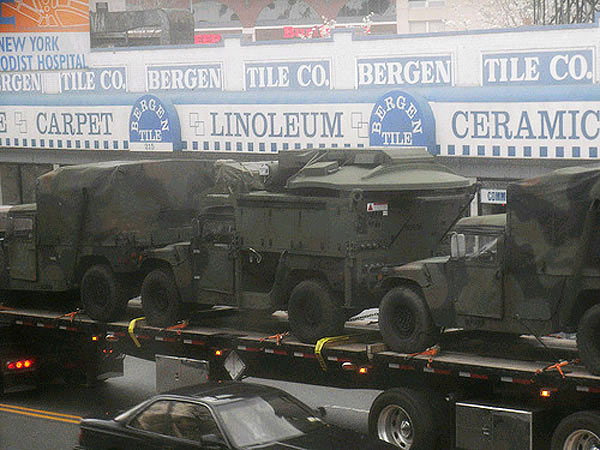 Reader Daniel pointed our attention to this photograph of a military trailer, carrying Humvees and headed towards Manhattan on Flatbush. He noticed that the center one was "outfitted with the so-called non-lethal Active Denial System."

What's the Active Denial System, you ask? Here's how the AP described ADS in 2007: "The military calls its new weapon an 'active denial system,' but that's an understatement. It's a ray gun that shoots a beam that makes people feel as if they are about to catch fire."

As for why the Humvees were in the city, maybe they were shipped to the Red Hook Container Terminal and will be used to...help protect the Pope!

#active denial system
#brooklyn
#defense
#flatbush avenue
#Humvee
#military
Do you know the scoop? Comment below or Send us a Tip