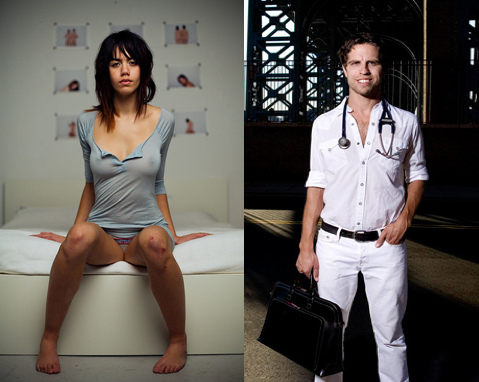 We're really surprised no one thought of this sooner: vintage healthcare! Well, sort of. Jay Parkinson declares he is a "new kind of physician," and he is. Revolutionary, in fact. Based out of Williamsburg, he's bringing healthcare to those who wouldn't normally be able to receive it without breaking the bank...giving the uninsured masses a reason to breathe a sigh of relief. He's also mixing this idea with an old one: house calls!

Back to the new edge he's bringing to the medicine game, though -- not only is his service inexpensive and for everyone, you can get checked out online! You see, Dr. Parkinson is a little more "with it" than your average MD, and he's making it easy for his patients. He'll discuss your problems with you over email, IM and video chat -- because who wants to leave their bed when they aren't feeling well? As an added bonus: this means no waiting rooms (unless, we suppose, he sets his IM status to "away").

Sure, when he's not doling out meds and sitting bedside with an ailing patient...he's taking nude photos of the ladies (NSFW!) but that shouldn't creep you out at all. And hey, maybe you can get a new MySpace photo out of this house call if you ask nicely.

#As
#breaking
#flickr
#health
#Jay Parkinson
#myspace
#NSFW
#nude
#photos
#video
#williamsburg
Do you know the scoop? Comment below or Send us a Tip