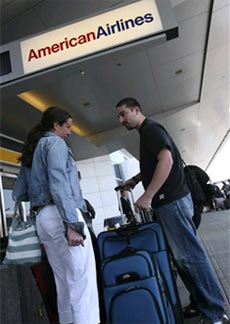 With oil prices rising higher and higher (they rose above $135/barrel yesterday), American Airlines says, starting June 15, it will charge passengers $15 for the first checked bag. A few months ago, American and other airlines followed United in charging $25 for a second checked bag and since these fees are one-way only, if you're bringing two checked bags, that's another $80 you'll have to add to your airline ticket.

It is likely other airlines will follow suit with a first checked bag fee, though Delta said it had "no plans at this time" to match the program. American CEO Gerald Arpey said he hoped the company would make hundreds of millions with the new fee, "Our company and industry simply cannot afford to sit by hoping for industry and market conditions to improve."

Flight attendants are bracing themselves, as passengers will probably "try to stuff more carry-on luggage into overhead bins." Association of Professional Flight Attendants president Laura Glading told the NY Times, "It’s only going to get worse and worse."

American, which is the biggest airline carrier in the world, is also cutting at least 300 daily flights this fall. An airline trade organization expects 20% in flight cuts from other domestic carriers, too.