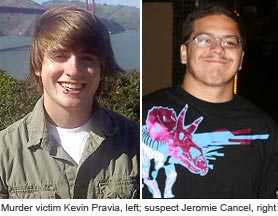 The Post has detalis of the chilling confession made by Jeromie Cancel, the 22-year-old who killed a Pace student in late August. According to Cancel, he was smoking with one hand while "pulling tight on the electrical cord around his victim's neck with the other"--all while watching Saw on DVD.

Cancel had met Kevin Pravia, 19, at Union Square; Pravia was reportedly looking for drugs. He went back to Pravia's apartment in Chelsea; after Pravia fell asleep, Cancel initially stole Pravia's computer, cell phone and iPod and left the apartment. In the confession, Cancel said, "I was bored, so I decided to go back into the apartment and kill him." He strangled Pravia while he slept--and told cops he noticed Pravia's eyes open. Pravia's body was later found by his roommate.

Cancel's father called the police when his son (previously described as mentally imbalanced and having drifted from city to city) arrived at his Queens home and said he killed someone. Cancel reportedly also told the police, "Can you cuff me in the front so I can throw gang signs?" The confession was filed in court at Cancel's arraignment. However, Cancel, who is being held without bail, pleaded not guilty to second degree murder.

#Chelsea
#Jeromic Cancel
#Kevin Pravia
#murder
#pace murder
#pace university
Do you know the scoop? Comment below or Send us a Tip