Oysters Return to the Bay as Filters, Not Food 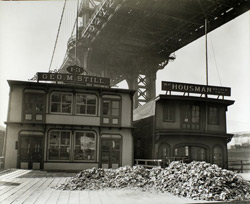 In Mark Kurlansky's 2005 book about New York City and oysters, The Big Oyster: History on the Half Shell, the author suggested that given the improved environmental conditions of New York Bay, perhaps the time is ripe to start replanting the oyster fields that used to carpet the underwater surface. The City and environmentalists are now undertaking a project to replant oyster beds in the bay, not for harvesting, but as natural, or soft, anti-pollution filters.

According to The New York Times, oysters used to blanket 350 square miles of New York's Upper and Lower Bays. Joseph Mitchell wrote that the Dutch called Ellis Island Oyster Island and Bedloe's (Liberty) Island was Great Oyster Island. By 1930, most of the beds had been rendered dead or not viable for harvesting due to over fishing and pollution.

Scientists have determined, however, that oysters can filter between five and 50 gallons of water a day. A pilot project is being tried in Hendrix Creek, which flows a mile through Brooklyn before emptying into Jamaica Bay. It's an estuary that serves as an outflow channel for a waste water treatment plant. Oysters and ribbed mussels are being cultivated there to absorb nitrogen, algae, and bacteria from the water and serve as a foundation for a natural ecosystem to develop.