A new lawsuit filed in federal court last week aims to challenge a reality evident to anyone who has attended a large political gathering in Lower Manhattan over the past decade: lawful behavior is no safeguard against being arrested.

The lawsuit centers on more than 200 arrests made around the first anniversary of Occupy Wall Street in September 2012, when the NYPD "should have known that members of its police force would encounter individuals engaged in expressive speech activity."

Instead, the NYPD continued to arrest and harass protesters for seemingly no reason other than that they were protesting.

The lawsuit asserts that this is part of a "pattern, policy, and practice of the NYPD misapplying the disorderly conduct statute to peaceful protesters in New York City."

"The City of New York has continually failed to appropriately police the many non-violent and lawful expressions of speech, resulting in the continual breach of individual rights, the waste of judicial and civic resources, and the need for appropriate training policies, methodologies, and systems to address individuals conducting peaceful and legal expressive speech as protected under the First Amendment," the suit states. 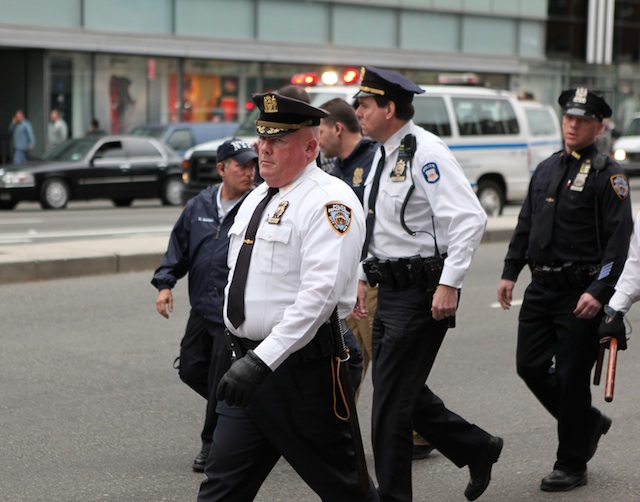 Remember, it was the "white shirts," or NYPD commanding officers, who set the tone for how these protests would be policed: pepper-spraying a group of women standing on the sidewalk, sucker-punching a random man in a crowd of people, or in the case of former Chief of Department Joseph Esposito, the highest-ranking uniformed officer in the NYPD, body-checking a protester with his baton. (After retiring from the NYPD, Esposito was appointed by Mayor de Blasio your Commissioner of Emergency Management.)

This behavior eventually cost the city millions of dollars.

In addition to Esposito, Mayor Bloomberg, and former NYPD Commissioner Ray Kelly, the suit names other police officials who seemed to truly relish cracking down on protests, including Deputy Chief "This is New York City, you can't be making noise at night" James McNamara, and Deputy Chief Thomas Purtell, seen here tossing a live-streamer to the ground like he's facing the cameras at Summerslam.

Legal experts tell the New York Times that the suit "raised important questions" and noted that it's "well-written," but one expert believes that “These plaintiffs are going to have a really tough time making a case" against the City itself.

In an email, Wylie Stecklow, one of the lawyers representing the plaintiffs, responds that "my firm has spent the past few years litigating twenty different cases involving constitutional violations of rights of members of Occupy."

Steecklow adds that depositions of NYPD officials obtained in other suits would help the plaintiffs prevail: "These class representatives are in a very good position to move forward on their claims."

Meacham was arrested by Inspector Edward Winski, who has been named in many Occupy-related lawsuits against the City; this lawsuit cites a deposition in which Winski admits that he has never received any training on the First Amendment.

You can read the entire complaint below.

#first amendment
#occupy wall street
#ows
Do you know the scoop? Comment below or Send us a Tip
A new Gothamist is coming! We’ve moved comments over to our beta site. Click here to join the conversation and get a preview of our new website.