Three years to the day after the launch of Occupy Wall Street, the anti-capitalist, anarchist-infused popular movement that rapidly caught the imagination of the country—inspiring hundreds of encampments across the nation—some of its longest-standing and most visible participants are suing each other in the Supreme Court of New York. Over a Twitter account. The suit asks for $500,000 in damages.

The lawsuit, which was filed today, concerns the @OccupyWallStNYC account, which has has been one of the primary voices of Occupy from the very beginning. Even after the two brief months of the actual encampment, it continued to attract followers. Today more than 177,000 people follow it.

But who speaks for a leaderless movement? On one side of this suit we have the OWS Media Group, which includes Marisa Holmes, a soft-spoken filmmaker and one of the foundational organizers who laid the groundwork for what would become Occupy Wall Street throughout the summer of 2011.

Holmes says that the Twitter account was created by Adbusters Magazine, which also provided the initial spark to Occupy by calling for a protest. As the planning assemblies in Tompkins Square Park gathered steam, Holmes says, then-Adbusters-editor Micah White agreed to turn over control of the Twitter account.

Wedes did not directly respond to a request for an interview, and declined comment through an intermediary. In a post on his blog last month, Wedes framed the facts differently, suggesting that the Twitter account “had been handed to me by a comrade…. tasked with delivering it to someone in New York City on behalf of Adbusters.” (A screenshot of an email forward from Holmes that Wedes links to doesn’t appear to support this gloss.)

“Justin was one of many people who had access to the account, but he was never given ownership of the account. That was completely contrary to the spirit of the thing,” Holmes said. “We were sharing everything. We wanted as many people as possible to have access and to share their experiences.” 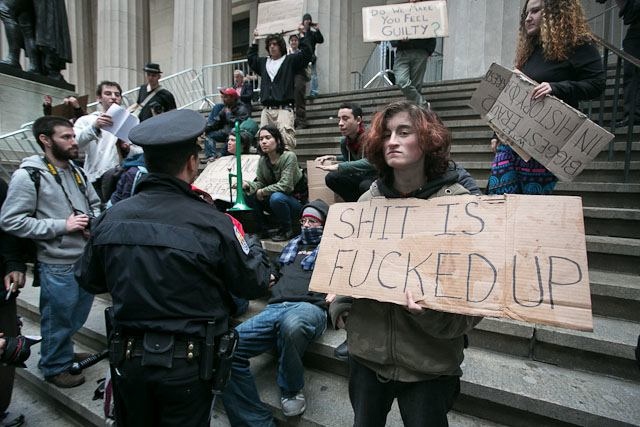 The Media Center, erected at the heart of Zuccotti Park, was a place where visitors to the park could come and write their own tweets from the Occupy account, side by side with the ceaseless bustle of the occupation’s video production operations. As Occupy and its media operations grew, smaller specialized groups were created, some focusing on livestreaming video, some on countering mainstream media narratives, and one focused exclusively on Twitter.

Over time, Holmes says, Wedes began to assert more and more control over the account. At the same time, there was growing concern about Wedes’s own use of the account, which he frequently used to plug his own projects, including a summer camp for Brooklyn students and, more recently, a project to bring water to Detroit residents cut off by utility companies.

Again, Wedes presents the email threads surrounding this conversation differently: “A thread about “self-promotion” became just another shaming session,” he wrote. “If we start from a place of assuming bad intentions—i.e. discouraging “self-promotion” over encouraging solid, relevant content—we will end up with rules that shame rather than empower.”

At the same time, as Israel’s bombardment of Gaza produced a growing number of solidarity actions among the New York activist left, Wedes angered other members of the Twitter team by attempting to prevent them from using the word “genocide” in tweets. “He was on his way out,” Holmes said. “He was going to asked to leave the account, and instead he just took it.” 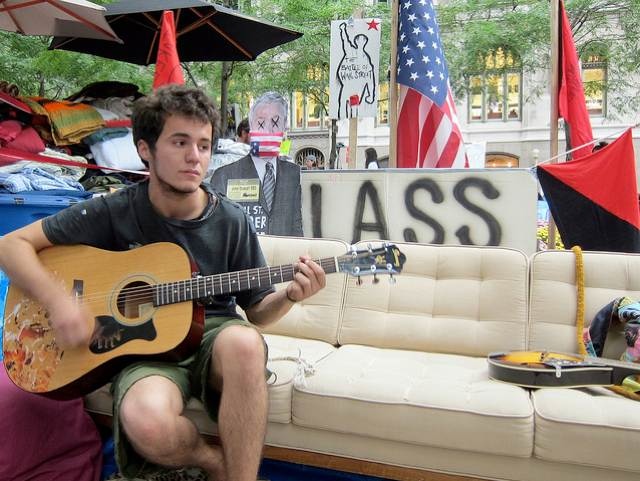 Wedes changed the passwords associated with the account, effectively locking everyone but himself out. “Even collective resources like gardens need human stewardship,” Wedes wrote shortly afterwards. “I don’t shy away from currently being the chief steward of this account.”

In addition to the $500,000 in compensatory damages, the lawsuit asks the court to issue an injunction that would force Wedes to stop Tweeting from the account during the legal proceedings, and permanently turn the account over to the OWS Media Group. "Wedes’ assumption and exercise of custody, dominion, and control of the Twitter Account interferes with the possessory rights of Plaintiff in the Twitter Account," the complaint alleges.

For Holmes, this takeover represents a betrayal of the collective work and ideals of everyone for whom Occupy meant something.

“Three years ago today, we occupied Zuccotti Park. We renamed it Liberty, and we started an occupation that inspired thousands of occupations all over the globe,” she says. “We did that to confront global capital, and to build our own alternative structures in the wake of that. It wasn’t about taking power or positioning ourselves so we could benefit personally. It was about creating a movement. It’s really sad three years later to be in the position of having to defend that.”

This isn’t the first time a controversial figure within Occupy has caused an uproar by asserting control over a digital resource associated with the movement. Earlier this year, Justine Tunney, a Google employee and masterful Twitter troll who identifies herself as one of the founders of Occupy Wall Street, angered many when she seized control of another popular Twitter account linked to the movement.

“In both cases there’s this vying for power, and this assumption that we actually need them to lead us,” Holmes said. “We don’t.”

Holmes concedes there’s a certain irony to the fact that, as an anarchist, she’s resorting to the United States justice system to resolve the dispute. “It speaks to the amount of work we have yet to do,” Holmes says. “I wish we had better alternatives in place. The revolution hasn’t happened yet.”

You can read the full lawsuit below.

#Is backbiting the fate of every revolution
#Justin Wedes
#Marisa Holmes
#occupy wall street
#twitter
#original
Do you know the scoop? Comment below or Send us a Tip