A construction worker is suing the owner of the pricey Williamsburg apartment building that the city evacuated before Thanksgiving, claiming that he fell from carelessly erected scaffolding doing work that doesn't show up in city records. In the suit, lawyers for Alvin Eugene write that he was part of a crew hired to "build out the bedrooms" at 120 South Fourth Street, and that on September 3rd, 2014, "defective and improperly placed and maintained scaffolding which was not properly secured" shifted, sending him plummeting. Eugene injured his knee, suffered a fractured wrist that required surgery, and was homebound and unable to work for seven months, the lawsuit states.

Eugene is going after several contractors and the building's owner, South 4 Residence LLC, for lost wages, medical bills, and other damages.

The building at the foot of the Williamsburg Bridge has a fraught and bloody history, the latest chapter of which is the mandatory evacuation of a beauty salon and some 50 residents after building inspectors discovered un-permitted work and deemed the building "has questionable structural integrity."

Before that, back in 2009, the Department of Buildings fined a contractor for prior owner Menachem Stark $8,000 for failing to report a job site accident, an amount that has yet to be paid. Work on the five-story apartment building, first formally proposed in 2006, stalled for years in the wake of the 2008 financial crisis, which reportedly hit Stark especially hard—at one point he and a partner were being sued for $51 million in bad loans on properties in Williamsburg and Greenpoint. During that period, the city fined Stark and his company $19,000 for failure to secure the construction site, and during periods of intermittent work, for contractors working without permits and required safety equipment. He never paid up, records show.

Somewhere in there, between 2007 and 2009, contractors built an extra floor above the four stories Stark had originally gotten approval for. In 2012, work had stalled again and a day laborer known around the neighborhood was found stabbed to death in the unfinished building.

Construction appears to have concluded sometime in 2014. Stark was not around to see it, having been kidnapped and killed, his burned body left in a dumpster on Long Island in the early days of that January. Just before his death, someone had complained to the city that residents were being "forced" to move into the South Fourth building though construction had not finished and it wasn't registered with the city. Stark's brother-in-law Abe Bernat took over the building following his death, property records show, and, somehow, the DOB granted him a certificate of occupancy in the summer of 2014. Whoever signed off on the document does not appear to have dotted all his or her i's—the building is described as being four stories tall.

It's not clear what exactly Alvin Eugene and his crew with the firm RJ Contractor & Home Improvement were hired to do, largely because no record of a permit for it appears in the DOB's online database. The larger job may have something to do with a violation building inspectors wrote out in June of this year for the un-permitted subdividing of two apartments for use as an illegal hotel. Bernat paid the $400 fine, records show.

Eugene's lawyer Cheryl Moin said that Eugene was working 13-hour days and was hanging sheetrock at the time of his fall. Moin explained that Eugene was working inside on a six-foot tall piece of scaffolding, but needed to go even higher and "was forced to become a human hoist." She said he fell 10 feet and his wrist fracture required a metal plate and screws to stabilize.

"This accident would never have happened if Mr. Eugene had been given a proper scaffold and hoists, as the required by the law in New York state," Moin said.

In his lawsuit, Eugene accuses Bernat and subcontractors of "negligence, carelessness and recklessness." The subcontractors failed to defend themselves in court and, records show, a judge granted a default judgement against them, putting them on the hook for part of the at least $77,000 Eugene is seeking (his lawyer has yet to fully tabulate the damages).

Bernat's LLC, however, is fighting back, accusing Eugene of causing his own fall. In a response, lawyers for South 4 Residence wrote that Eugene "knowingly and with intent, destroyed, avoided, or bypassed safety devices, thereby modifying the safety equipment provided and causing his accident," and that his "own conduct was the sole proximate cause of his alleged accident and injuries." Bernat's lawyers also roped Eugene's employer RJ Contractor into the lawsuit, arguing that if found culpable, the building owner shouldn't bear all the blame.

A trial is scheduled for April of next year. According to a recent New York Times report, construction injuries and fatalities spiked dramatically in 2014 and 2015 as contractors taking part in a citywide building boom cut corners, and often faced minimal or no repercussions for maiming their workers. A Department of Buildings spokesman could not immediately determine whether Eugene's fall had been reported as required. 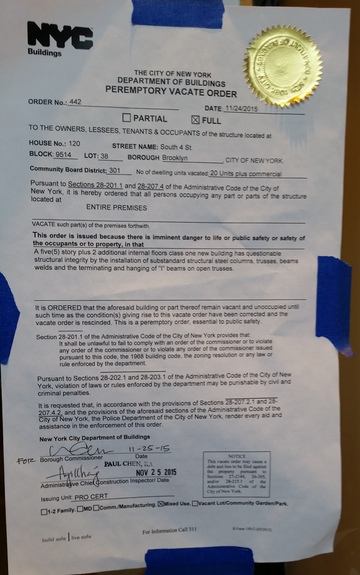 Meanwhile, tenants of 120 South Fourth have no idea when they might be let back in. A Buildings Department spokesman told Gothamist Bernat won't necessarily have to demolish, but that it will require significant construction to address the unstable columns and structural elements. According to a DNAinfo report, Maria Barca, owner of Self Salon, is locked into a 10-year lease for the commercial space on the ground floor, and her insurance company isn't covering her losses. Bernat gave her some money to cover her first week, and she is working out of four chairs at Cobalt Salon on Wythe Avenue, as well as Self's Bushwick location. Barca told the website she'd had no issues with Bernat before this.

"The Self team is not letting this minor speed bump affect our dedication to service!" she wrote in a Facebook message to clients.

Bernat is scheduled to answer to the slew of violations that led to the vacate order at a hearing in early January. The DOB said it is investigating how he was granted a certificate of occupancy.

"The building owner's conduct was irresponsible and outrageous—they cut corners and put residents' safety at risk," department spokesman Joe Soldevere said in a statement. "Working with our partner agencies, we are investigating this incident and will hold accountable those responsible."

Bernat and lawyers for South 4 Residence and Eugene did not respond to requests for comment. A call to a number listed at the address of RJ Contractor & Home Improvement was not returned.