The owner of a Bed-Stuy kink dungeon is tied up in a feud with a scandalized neighbor who's accusing the owners of running a sex club. The Taillor Group, a kink and fetish space, as well as a self-described intersectional feminist collective that holds free self-defense workshops, moved into Quincy Street in January. Now, they're looking to move following repeated harassment from a religious next-door neighbor, according to owner Charlotte Taillor.

"She’s against everything we are, from queer to kink to sex-positive and body-positive. And the whole sexual liberation movement? She is not down with it," Taillor tells Gothamist. Taillor says the neighbor in question often shouts outside the building, and that many of the members of the collective have since quit.

News of the neighbor's objection was first reported by Patch Brooklyn . On January 31st, flyers posted around the neighborhood urged local residents to call Community Board 3, as well as the 79th Precinct, about "a gentleman's sex club called Taillors." Over the phone, Taillor balks at the suggestion that the business is a "gentleman's club." "No, we’re a kink space, we’re a feminist collective," she insists. "We don’t even call men gentlemen here...they’re on their knees."

On February 9th, Taillor says she attended a local block association meeting and tried to make amendments that would help assuage any fears, including changing the hours and reference address of the space. "We tried so hard to respect her block, be nice to her block," Taillor says. "[The neighbor] just wants us to leave, which I want to. I have no interest in being at a place where we’re not cherished, you know?" Taillor has since launched a GoFundMe page so that she can move the business to another location.

Around mid-February, Taillor put a note on her neighbor's door telling her about the imminent move, and asking her to cease with the complaints. Taillor's neighbor replied with her own concerns, and you can read them both below. 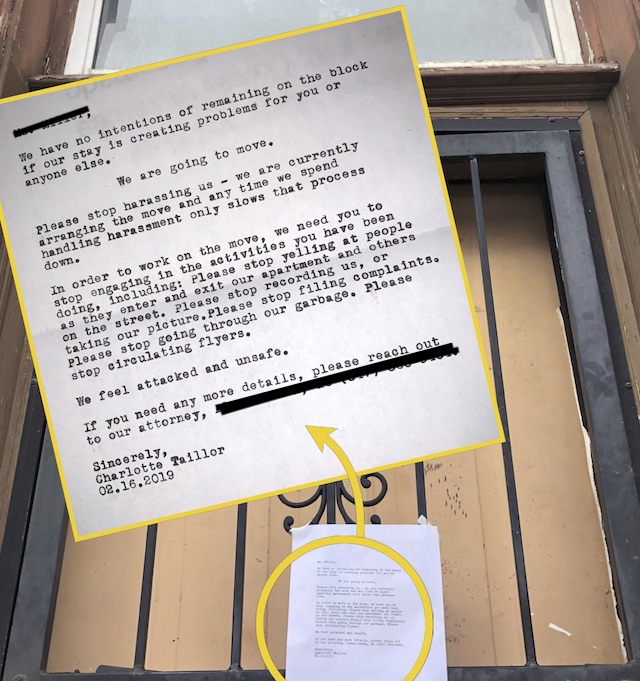 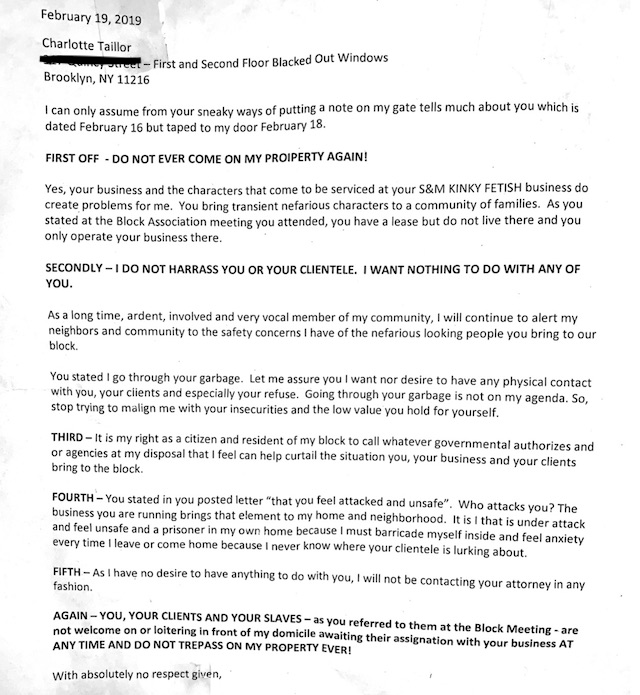 Tonight, the block association will hold a community meeting at the Macedonia Church of Christ to discuss the business. "I don't mind them making money," Tony Santana, the former president of the block association, and who lived there for 13 years, tells Gothamist. "The fact that we have a lot of kids on this block is my main concern."

#bed stuy
#business
#church
#fetish
#kink
#religion
#original
Do you know the scoop? Comment below or Send us a Tip