Everyone's favorite transit authority has been ignoring a toilet overflowing with shit for the past three days, and now riders have to deal with the stinking consequences.

Here's what we know: On Friday morning, New York City Transit warned riders of delays on the A, C, E, F and M trains, which they attributed to the crew needing to take a "pit stop." Some riders were confused and frustrated, though a few did appreciate the candor. Most of us assumed that a train conductor needed a bathroom break, a perfectly understandable thing that does sometimes happen.

But that does not seem to be the case here. According to photos sent to Gothamist, the real culprit for the pit stop was a busted toilet brimming with feces at the 42nd Street/8th Avenue control tower. Transit workers say that the MTA has refused to address the mess for going on three days now, despite their ongoing pleas. A sign in the tower urges employees to "call in the septic tank/feces issue repeatedly until the problem is resolved." [UPDATE BELOW] 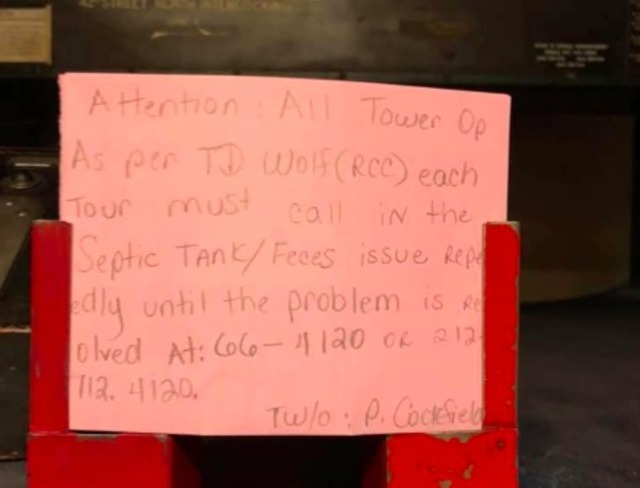 A sign inside the 42nd Street tower (Provided to Gothamist)

The icky situation for workers became a nuisance for many more New Yorkers on Friday morning, after a tower operator was forced to abandon his/her shift to seek out an alternative toilet, thereby interrupting service on five lines. We'll let erstwhile subway guru turned car blog traitor Aaron Gordon, who first reported the clog for Jalopnik, explain how this happened:

Most of the subway lines intersect and overlap, moving between lines at particular junctions. For the lines in question (the A, C, E, F, and M lines), many of the switches, which move to send the trains on the appropriate track, are operated by humans in a control tower. And sometimes, those humans in the control tower have to poop.

Without a tower operator at the helm, trains can’t run up the local track (the C and E trains) due to the particulars of how that switch works. Further, there’s no one to send the northbound E’s to Queens instead of up 8th Avenue. That’s why NYCT had to divert trains while the tower operator hit the head, instead of merely announcing 'delays' on the line, which is what happens when the crews on the train have to run into the station to answer nature’s call.

Of course, the true victims of this story are not the commuters (though the fact that the delays happened while the L train was also shitting itself did not help things). Those who really suffered are the tower employees, who have been forced to contend with rancid working conditions for days because the MTA apparently can't be bothered to respond to a simple maintenance request.

On Friday, Tramell Thompson, a union activist and subway conductor, wrote NYC Transit President Andy Byford a letter, informing him the situation was "beyond disgusting and shows the lack of respect Supervision have for the rank and file members...It's sickening here!"

In a message to Gothamist, he added, "the toilet's been over flowing with feces for 3 days and workers have been forced to work there."

A spokesperson for the MTA said they would look into the matter and get back to us.

UPDATE: According to MTA spokesperson Shams Tarek, a broken toilet at the operating tower did cause some service disruptions this morning, but there was also a separate emergency bathroom situation involving a conductor.

"We had two employees who needed emergency bathroom breaks on the A/C line this morning, around exactly the same time during rush hour—at about 8:35 the operator in a control tower at 42nd Street and 8th Avenue and at about 8:45 the operator of a C train stopped at Jay St-MetroTech," Tarek said in a statement to Gothamist. "The tower operator needed to use a bathroom farther away than usual because the one in the tower recently went out of service for repairs and was not restored yet."

The improbably-timed bathroom breaks only impacted service until "about 9:02 a.m.," according to the spokesperson. The toilet clog at 42nd Street was repaired and returned to service earlier this afternoon. The MTA thanks you for your patience.

#a train
#brown line
#MTA
#p train
#we the commuters
Do you know the scoop? Comment below or Send us a Tip