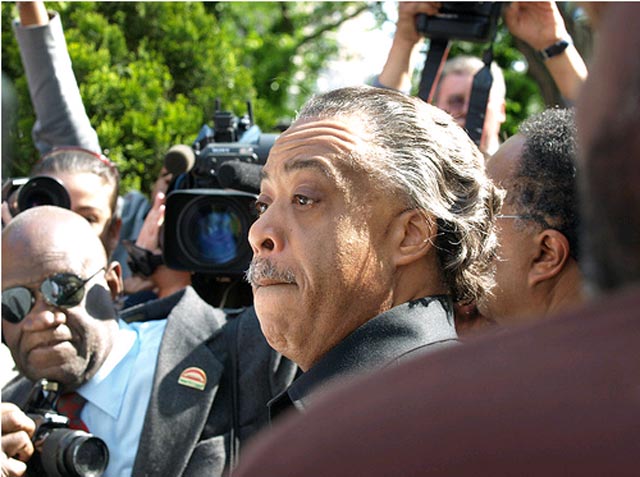 Photograph of the Reverend Al Sharpton by Armchair Messiah on Flickr

Two hundred sixteen people were arrested during pray-ins protesting the acquittals of three police detectives in the shooting of Sean Bell. The NY Times called the demonstrations "carefully orchestrated," as hundreds of (perhaps a thousand) people gathered at six different locations in Manhattan and Brooklyn, blocking traffic and attracting arrest.

The Reverend Al Sharpton, Bell's fiancee Nicole Paultre Bell, and Bell's two friends who were with him the night he was fatally shot, Joseph Guzman and Trent Benefield, were all arrested at the Brooklyn Bridge protest. The Daily News reported a police lieutenant yelling to Sharpton and others, when they were attempting to march across the bridge, "you are unlawfully obstructing vehicular traffic...I order you to leave the roadway now."

But "Sharpton refused, dropped to his knees and started praying." They were all released around 9 p.m. The NYPD said, "Both the civil disobedience and the resulting arrests were conducted in an orderly fashion."

Sharpton and the Bell family will be meeting with Governor Paterson this afternoon. Also, Sharpton's National Action Network is planning another protest in the next seven to ten days. NAN national acting director Charlie King said, "Yesterday was the beginning of a long and sustained campaign of civil disobedience."