Over 100 Dead in Mumbai Terror Attacks 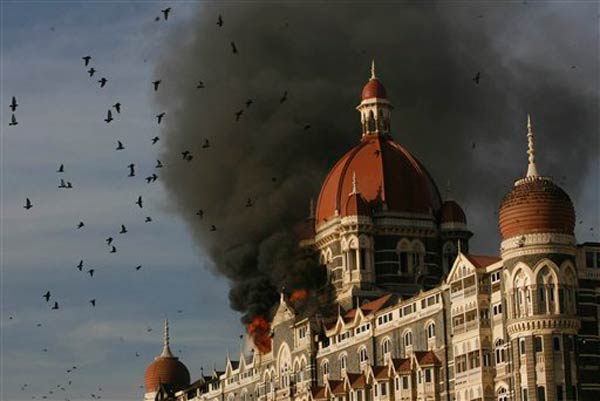 Photograph of the Taj Hotel, one of the buildings attacked, continuing to burn in Mumbai, India by Gautam Singh/AP

Yesterday, a series of coordinated terror attacks in India's financial capital Mumbai left over 100 dead and hundreds injured. Indian Prime Minister Manmohan Singh said the attacks probably had "external linkages," which the NY Times reports is the "first official indication that the authorities were likely to blame outsiders." The attackers have taken hostages, many of them foreign tourists; some have been released.

The terrorists used automatic machine guns and grenades at two luxury hotels, a train station, the Jewish Chabad center, a hospital, movie theater and a popular cafe for tourists. Some of the attackers were killed while others were arrested. CNN reports, "Police say the attackers came by boats to the waterfront near the Gateway of India monument. Of the nine suspects arrested in connection with the attacks, seven are fishermen. Police also found a boat loaded with explosives near the Taj, which is located on the waterfront." Experts tell the Times that they don't think the group is linked to Al Qaeda, with Georgetown's Bruce Hoffman saying, "It’s even unclear whether it’s a real group or not."

The large Indian community in NYC is closely watching the events. The Daily News spoke to residents and merchants in Jackson Heights. One man whose nephew lives near one of the attacked hotels said, "His cell phone is ringing and he's not picking up. It's now 4:30 a.m. there. I'm going to keep trying." And Mayor Bloomberg gave a statement yesterday:

"Today a horrific series of attacks in Mumbai, India reminded us that there remain dark forces in the world that think killing innocents is a way to advance an agenda. New Yorkers, including the hundreds of thousands that trace their roots to that part of the world, stand together and reject the depraved methods of the terrorists. New York is in many ways similar to Mumbai: it is a wonderfully diverse city that is a leading center for business, education, science and the arts. I extend my deep sympathies to the families of those killed and to those wounded in today’s attacks. Tomorrow, I will join members of New York’s Indian community at the Ganesha Temple in Queens for a prayer service.

“We live in a world that is knit closer together than ever, and the threat of terrorism reverberates around the globe. Just today, we dealt with an unsubstantiated report of potential terrorism here in New York. This report led the NYPD to take precautionary steps to protect our transit system, and we will always do whatever is necessary to keep our City safe. I encourage New Yorkers to leave the security to the professionals and fully enjoy their Thanksgiving holidays. And please keep those affected by these attacks in your prayers.”

Here's a timeline of the attacks from the Times of London and here's a live update from BBC News.

#india
#mumbai
#terrorist attacks
Do you know the scoop? Comment below or Send us a Tip