There has been a rash of anti-semitic and racist graffiti spotted around NYC in the wake of Donald Trump's election, and the trend continued this weekend when straphangers spotted swastikas and pro-Trump hate messages on the 1 train. 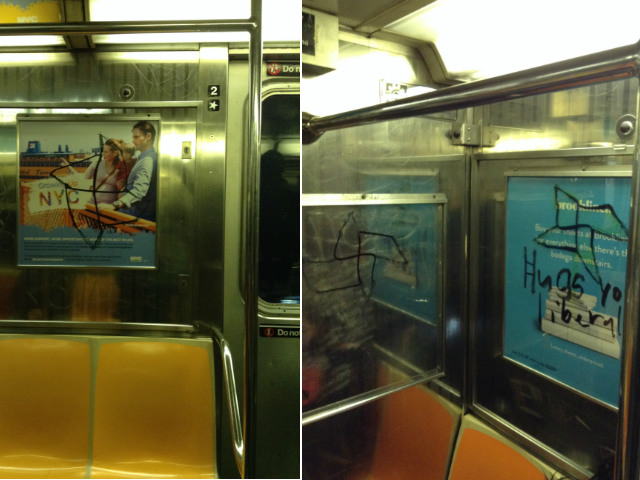 Tipster Joseph L sent in the photos above, which he spotted aboard an uptown 1 train he boarded at 23rd Street around 8:15 p.m. Sunday. "All originally looked like the swastika on the seat, but a good spirited rider asked fellow passengers if they has pens, markers, etc. and then transformed them into flowers/stars and even added a few messages of love alongside," he told us.

The Daily News added that the vandal or vandals used permanent marker in drawing the swastikas. "For me, it was sickeningly ironic that I boarded this train after spending the evening participating in a protest march organized by Jewish Voice for Peace against the hateful sentiment that has become associated with the incoming administration," Joseph L. added.

These were all found last night in New York's subways, along the 1 train, between Columbus Circle to 86th Street. pic.twitter.com/B5rl2iDP8k

A little bit of hope. Just watched a creative NY-er fix all the swastikas on the train pic.twitter.com/WxwsO5nrDa

Hate crimes around the city have reportedly increased over 30 percent over last year, with 328 such crimes reported this year compared to 250 during at this time in 2015. Since the election, that has included dorm rooms found vandalized with swastikas at the New School; swastikas etched on the door to State Senator Brad Hoylman's Greenwich Village building; swastikas on the B train; and swastikas and "Go Trump" graffiti at Adam Yauch Park, which prompted a huge protest rally this weekend.