Hundreds of Queens residents stood up and turned their backs on Department of Homeless Services Commissioner Steven Banks on Wednesday night, shouting as he attempted to explain why their neighborhood was suitable for a new 110-bed homeless shelter. Their dismissal capped off weeks of vehement protests against the proposed site.

The harried commissioner attempted to describe services that nonprofit contractor Acacia Network had pitched for the proposed shelter, which would replace a Holiday Inn Express at 59-40 55th Road, likely in October: case management, 24-hour security, employment and health services. His remarks were repeatedly drowned out by the heckling crowd. "Boo this man!" someone shouted.

"Commissioner, you have a legal and moral obligation to the taxpayers," said Maspeth resident Manuel Caruana. "Not to the homeless."

The Knockdown Center provided impressive acoustics and ventilation, for a community board meeting. Suited security guards and NYPD officers lined both walls of the music venue, and hundreds of white folding chairs filled the 50,000-square-foot space in perfect rows. Sound technicians adjusted dials as residents and politicians accused Mayor de Blasio of betraying their community. "This is pretty weird," said a Knockdown Center worker with tattooed arms, handing out cups of water at the back of the room. "And we do a lot of weird shit." 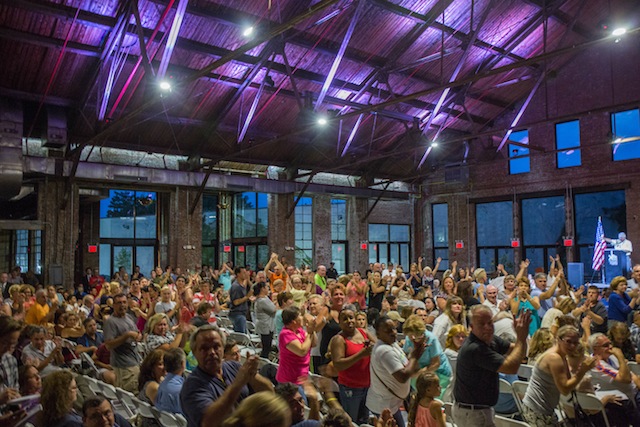 The city said earlier this month that it would review alternative shelter locations within Maspeth—a predominantly-white working class neighborhood in Queens, relatively isolated from public transit. But on Wednesday residents reiterated their opposition to any shelter, and suggested that New York City could mitigate its homeless crisis by removing homeless people from the city and denying shelter to non-New York City residents, among other measures. A seminal interpretation of the New York State Constitution currently mandates shelter services for anyone in need within NYC.

"People from all over the world want to come to New York City," said Community Board 5 District Manager Gary Giordano. "It's escalating the price of land, of apartments, and of homes. Serious consideration has to be given to relocating people to upstate New York."

According to the DHS, 135 families out of more than 12,000 in the system are recent New York City transplants. But Maspeth residents said on Wednesday that they believed New York was drawing homeless from across the country with what they say is an overly-generous policy. Several citied a New York Times article from earlier this week, which described the struggles of a family entering the shelter system a few days after arriving in New York from California.

"Why would someone come 3,000 miles to New York without a place to live. Why?" said Howard Moskowitz, 72, a retired teacher. "The message is clear: if you can get here by train, plane, automobile, bicycle or by foot, the city of New York, paid by our taxes, will take care of you."

While locals continue fundraising to sue the city, Queens Councilmember Elizabeth Crowley announced her own lawsuit against the City of New York and Commissioner Banks on Wednesday, arguing that the Holiday Inn Express lacks in-unit kitchens—a violation of federal shelter guidelines. (DHS did not immediately comment on its renovation plans for the facility, but a Law Department spokesman told Politico that, "The statute is clear on what the requirements are and they are being followed.”) Others suggested tax strikes, and an occupation of Gracie Mansion. 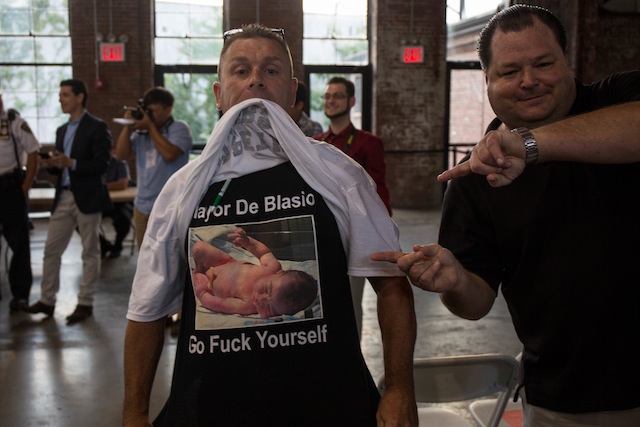 Many speakers on Wednesday voiced now-familiar arguments. "I first worked 50 hours a week to pay my rent, and then I worked over 60 hours a week to pay for my mortgage," said Phil Wong, 48, of Elmhurst. "These policies create a new generation of welfare recipients who lost any reason to support themselves. They know their benefit checks will always arrive on time."

Some said they did not believe that all homeless people posed a threat, citing their experience with a family shelter in the former Pan American Hotel in nearby Elmhurst. (Shelters have also opened in nearby Glendale and East Elmhurst in the last year, adding to local strife.) "We have had children approached by people from the Pan Am," said Karen Criscuolo, 42, a local middle school teacher. "But I've also taught kids from the Pan Am."

But everyone we spoke to was resolute that a homeless shelter would bring trouble. "It will destroy this neighborhood, as these shelters have destroyed every community they've been built in," said one 72-year-old Maspeth resident. "It's prostitution followed by drugs followed by stealing, break-ins, [and] car break-ins. It's just a way of life."

"There's a better quality of people moving in and they're taking over and keeping it clean, and we want to keep it that way," said Thomas Morrisroe, 67, a retired Middle Village resident.

According to DHS, 23% of adult families in the shelter system work, 43% are receiving federal disability benefits, and the remainder are required to participate in work assignment programs. 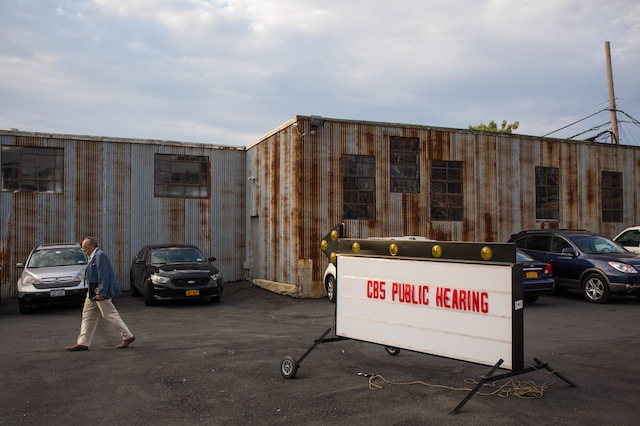 "I just don't think the spot is a good location," said Lance Lovejoy, 47, an electrician who's been a lead organizer of the nightly protests outside of the proposed shelter site. He wore a "Mayor de Blasio: Go Fuck Yourself" T-shirt (with a photo of a baby) on Wednesday. "I'm not against a homeless shelter, I'm against the location where it is."

Asked if he could think of a preferable location for a new shelter, Lovejoy was stumped. Residents of Bedford-Stuyvesant are currently protesting a proposed drop-in center for street homeless on Bedford Avenue, near a school and a main shopping strip. Their concerns are similar: an influx of outsiders, and fear for the safety of their children. "I don't know a good location," Lovejoy said. "Because I'm sure wherever I say, those people would not be happy either."

The average homeless New Yorker costs the city, state and federal government $58,000 per year, according to the Supportive Housing Network of New York. Advocates have long argued that the city should channel the money it is spending on the shelter system—which currently serves more than 60,000 New Yorkers—into permanent housing.

The city says that creating a new shelter in place of a hotel—rather than renting out some of the rooms on a short-term basis, helps meet this goal. CB 5 currently has no shelters within its borders, they argue. The nearest shelter is 1.4 miles from the Holiday Inn. "We are reviewing the proposal," Banks said Wednesday. "No contract has been signed."

#homeless shelter
#homelessness crisis
#maspeth
#original
Do you know the scoop? Comment below or Send us a Tip