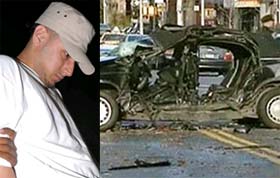 While friends and family mourn the deaths of a livery cab driver and passenger who were killed by a suspected drunk driver, they are also angry that the suspect was allowed to be driving at all. Daryush Omar, who is charged with drunken driving, criminally-negligent homicide, and driving with a suspended license, faces murder charges in a 2006 incident--and is apparently in the country illegally.

Omar, whose blood alcohol was 0.176 (more than twice the legal limit), said he only had two drinks before getting behind the wheel of his Range Rover. Police say he went through a red light on 31st Avenue in Queens, hitting the livery car at 34th Street and killing driver Bessy Velasquez and passenger Panayiota "Penny" Demetriou. Newsday reports that Omar originally denied he was driving and blamed the accident on Velasquez; he "could barely stand straight and was slurring his speech when police interviewed him at the accident scene moments after the" accident.

Omar also faces murder charges for the beating death of Thomas Whitney in 2006. He was released because the Manhattan DA's office didn't have witnesses. Whitney's father said, "Hopefully he gets convicted on this DUI crime and he does his time.They shouldn't let him back out on the streets."

Also, it turns out that authorities tried to deport Omar previously. According to the Post, he arrived in the U.S. with his mother in 1989 (there are conflicting reports over whether Omar is Pakistani and born in a Pakistani refugee camp in Afghanistan or is an Afghan). Then the Post details a number of instances when, starting in 1992, Omar was told to leave the U.S. but didn't ("In 2005, Omar allegedly renounced his Afghan citizenship in an effort to thwart deportation efforts"). Even after he was charged with the beating murder of Thomas Whitney in 2006, immigration officials did not hold him, explaining that ICE cannot "hold anyone past the legal 180-day limit set by Congress in 2001" and cannot use detention for "punitive reasons."