Outrage In The Powerless Zone: A Dispatch From Downtown Manhattan

Mayor Bloomberg said last night that we've come to "the end of the downside" of Hurricane Sandy—hey, if you can spare $150 and a cab ride, you can join him at the very first Brooklyn Nets game tomorrow. But power in Lower Manhattan won't be restored for "days," and plenty of people are still facing a mandatory evacuation, if they're not dodging glass shards or pitch black stairwells. While many of us will gripe about having to work from brightly-lit homes within feet of the machine that keeps food and alcoholic beverages cold, let's remember that for many people living downtown, Sandy is still here. 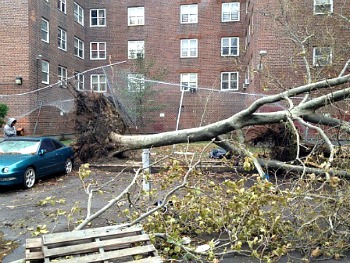 Jonathan Maimon lives in Downtown Brooklyn, where he commutes to his job as a associate portfolio manager for a mutual fund based in Jersey City. Maimon spent six years in Manhattan and calls it "a place that I'm pretty close with emotionally," which is why he made a meandering five-hour, 12 mile run across Lower Manhattan to survey the damage. Based on what he saw, he thinks that perhaps the city is moving on too quickly.

"There were no Red Cross vehicles, not a lot of city vehicles around to reach out to people and ask them what services they needed," Maimon says. "It was just pedestrians walking around and exploring. People were very calm, very friendly, you know how people are in New York. But what was shocking is that there was no food. Nothing was open. And then they have to go home to apartments without power."

Maimon adds, "And the most serious thing to me is elderly or disabled people in high rise buildings—this affects you if you're rich or poor. There's not a lot of ways for them to get out safely. I'm kinda worried about the city not really knowing how many of those people are out there." That's why he wrote this letter to us. "The mayor just said that the worst of the storm was behind us, which is factually true," Maimon adds. "But I personally think the worst is yet to come. Not having power is going to wear people down." Here's his letter [UPDATE: Help is on the way, people of the Powerless Zones]:

I just returned from Manhattan. I ran for 5 hours with stops, covering 12 miles in total, scoping the island from west to east. You will not hear these stories from the Mayor or Governor; these are my observations, informed by discussions with real people who live in lower Manhattan:

1) Virtually every retailer, restaurant and grocery store south of 38th street is CLOSED. This is in an area covering 8 square miles. I only observed a handful of bodegas in Soho and the East Village, along with Ben’s Pizza on W3rd and MacDougal serving customers. Whole Foods Union Square had a sign reading “because there is no electricity, we cannot open.” There is no food, other than what you have in your refrigerator.

2) To that point, there are close to 400,000 people living below 38th street without power. The mayor earlier said it could be 3 days without power; some Con Ed guys I spoke with in the East Village think it could be longer. Nobody knows.

3) No working traffic lights in this region (drivers are generally being cautious and appropriately yielding to pedestrians). Apartment stairwells are pitch black. High rises have no elevator access.

4) For now, this is an economic crisis - hourly workers cannot be paid, freelancers have no clients, small businesses have no sales, office buildings are shuttered. In my estimate, the lost output is $1 billion dollars EVERY SINGLE DAY that goes by without power for lower Manhattan. Included in this number is the shutdown of our major airports and transportation system. (Note that NYC’s economy generates $2.8 bn daily and over $1 trillion annually - which makes it the world’s 17th largest economy, if it was a country).

5) There is no running water or flushing toilets for people living in the Jacob Riis Houses and surrounding NYCHA buildings on the Lower East Side. In my estimate, this is roughly 20,000 people. One family I spoke with is packing their bags and moving to Brooklyn until services are restored. But it did not appear that all residents were evacuating, even as their toilets did not flush.

6) I did not witness a single Red Cross Truck or FEMA Vehicle or in lower Manhattan. Recall the assistance these agencies provided after 9/11 - this is NOT HAPPENING. There are bound to be hundreds of elderly people, rich and poor, who live on the upper floors of buildings with elevators that are now disabled. IF POWER IS NOT RESTORED, THIS WILL MOVE FROM BEING AN ECONOMIC DISASTER TO A HUMANITARIAN DISASTER.

7) If you think Chinatown normally has an unpleasant odor, imagine what it smells like 24 hours following no refrigeration. Street vendors were trying to unload perishables at bargain prices. I saw a fish weighing roughly 20 pounds and spanning 3 feet from head to tail go to a buyer for $1 dollar. $1 dollar!!!!! [Here's video he sent us.]

8) The substation responsible for the outage is a huge facility. It spans an entire avenue from Avenue C to D and a length of street from 13th to 14th. If crews have to inspect every coil and wire, it might be MORE THAN THREE DAYS UNTIL POWER IS RESTORED. Additionally, the site did not appear staffed with many Con Ed workers. As a note, the 2003 blackout lasted 15 hours.

9) The water from the storm surge was invariably contaminated - floating garbage, wood pieces from the dock, and possibly sewage. One Nuyorican woman who lived on Avenue C near 12th street noted the water level peaked above her waist. She was still visibly shaken this afternoon. She also recalled a huge noise at 8 pm when the substation failed. The sky, in her words, turned from black to green

10) There were some very generous things. Northern Spy Food Co. served lunch to everyone who lined up outside their restaurant at Avenue A and 12th street - polenta, pork buns, chicken, biscuits and freshly baked cookies. They get props in my book; all this food was served to locals at no charge.