Schools Chancellor Joel Klein, who is stepping down to take on a job at News Corp. (essentially switching billionaire bosses, going from reporting to Mayor Bloomberg to reporting to Rupert Murodch), defended his record and also insisted that he was leaving on his own terms, telling New York, "I had decided when I signed up for this thing that I would do it for two terms. At the end of those terms, I'd be in my mid-60s and would want another challenge.... [It was] Totally my decision. I talked to the mayor about it before the reelection. I went to him about three or four months ago and said I thought we were ready."

However, a different New York piece paints a different picture of the climate: "Bloomberg-administration insiders had long wearied of the chancellor's energetic self-promotion. 'Joel had hit a wall,' one associate of both men says. 'And the mayor's education legacy was getting lost in Joel's personality,'" and Bloomberg brought in Hearst publishing head Cathie Black to re-engage people and groups that Klein alienated. Additionally, Bloomberg apparently selected Black in a secret process, and even Klein didn't know who was replacing him until 30 minutes before the announcement.

Klein said yesterday, "You can argue about how much, you can argue which metrics matter, there's no question from 2002 to 2010 New York students made progress by every means or measure that is out there." The NY Times also has a report card on Klein's tenure; graduation rates have gone up, but students' test scores have recently fallen, after an upward trend: 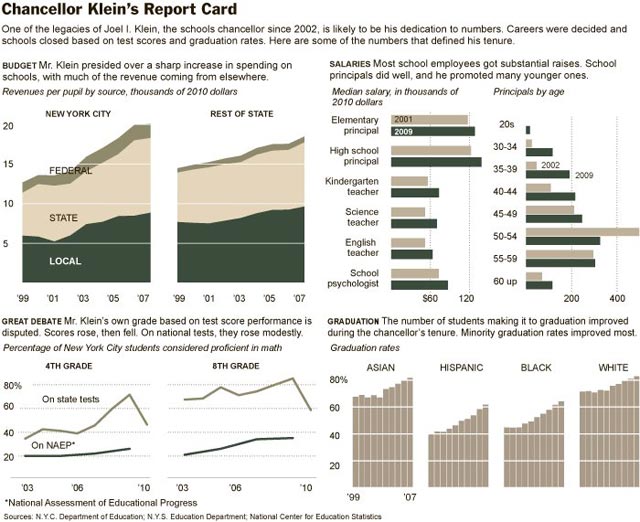 He also told New York, "The opportunity that News Corp. has offered me is one that's going to be very different three years from now. I think what you're going to see in educational software and new solutions and online learning is going to be game-changing. I now have a chance to do this with one of America's leading corporations, which has the depth and resources to make it real."