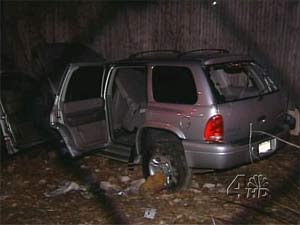 Two sisters were hit by an SUV that "barreled down Richards Street" in Brooklyn yesterday evening. The girls had been grocery shopping with their mother, who had been pushing the grocery cart and was not hurt. The family was apparently steps away from their building door.

The SUV, driven by a 48-year-old man, jumped the curb, hit the girls, then, per the Daily News, "continued on for some 200 feet, striking two parked cars" and finally stopped after crashing through a chain link fence. A witness told the News, "He was going very fast. He was driving on the sidewalk. I heard a screech and the car jumped out on the sidewalk."

The girls were taken to Lutheran Medical: 10-year-old Alin Esquivel was treated and released while 4-year-old Evelyn is in critical condition with head trauma. The driver suffered minor injuries and investigators are trying to understand how he lost control.

Transportation Alternatives recently updated CrashStat 2.0, the map that shows where vehicles have hits pedestrians and cyclists in the city. The News also points out the incident occurred "just steps" from where 10-year-old girl, who was making a snow angel, was killed by a snow plow driver who didn't see her and dumped snow on top of her.