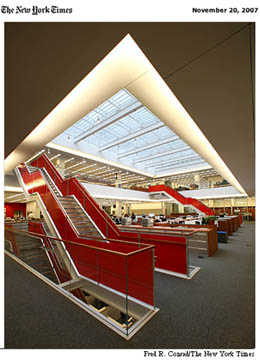 Nicolai Ouroussoff, the architecture critic for the NY Times, enjoys working in his employer's new headquarters, he writes today, but the building designed by Renzo Piano falls short of the best skyscrapers in the city.

For one, it allegedly harbors a streak of nostalgia, which in the world of architectural discourse amounts to an aesthetic identity crisis. The nostalgia in question is a longing not for neo-Gothic frills and cornices, but for the 1950s era of utopian corporate high modernism.

Secondly, the building's translucent scrim of ceramic rods "look flat and lifeless in the skyline," despite their sunlight-diffusing and energy-saving qualities. Thirdly, the top is pure anticlimax, appearing "ragged and unfinished." Ouch.

On the other hand, he loves the dramatic lobby, the open workspaces, and the blurring of the boundary "between the life of the newspaper and the life of the street." Yet the Times and other printed newspapers face an uncertain future.

In Ouroussoff's own words, "As advertising inches decline, the paper is literally shrinking; its page width was reduced in August. And some doubt that newspapers will even exist in print form a generation from now." That's right around the same time that Gothamist will be unveiling our gorgeous new skyscraper in the new Hudson Yards development site.

The new NY Times building has its own website. For the record, Ouroussoff mostly likes Gehry's IAC building, thinks there's a siege-like mentality in current design, and doesn't mind the Blue building on the Lower East Side. And last week, he was oohing over a planned skyscraper on West 53rd Street.