"Our Home Is Not A New Frontier": Bushwick Locals Fight New Luxury Development

Over 100 protesters gathered outside of the "Bohemian" luxury apartments at Colony 1209 on DeKalb Avenue in Bushwick yesterday to protest the 421-a tax abatement program, which incentivizes private developers to build residential housing in exchange for tax abatements. The program is up for renewal this June.

Colony, which started accepting tenant applications last April, received a 15-year 421-a tax abatement worth $8 million, according to advocacy group Make the Road. But despite receiving taxpayer subsidies, none of its apartments are below market-rate. (Which, in Brooklyn, seems to be par for the course. A study last year found that in the 61 Brooklyn buildings receiving 421-a subsidies, only 6% of apartments rented below market rate.)

Maria Contez, a resident of Bed-Stuy for 30 years, attended the protest in solidarity with Bushwick residents. "I'm here now because I suffer from gentrification," she said. "We lost Bedford-Stuyvesant, we lost Williamsburg, and now I am fighting for the people in Bushwick. We are low-income people, and we have rights. But they do the law for rich people."

"Here in Bohemian Bushwick," its website reads, "you'll find a group of like-minded settlers, mixing the customs of their original homeland with those of one of NYC's most historic neighborhoods to create art, community, and a new lifestyle." 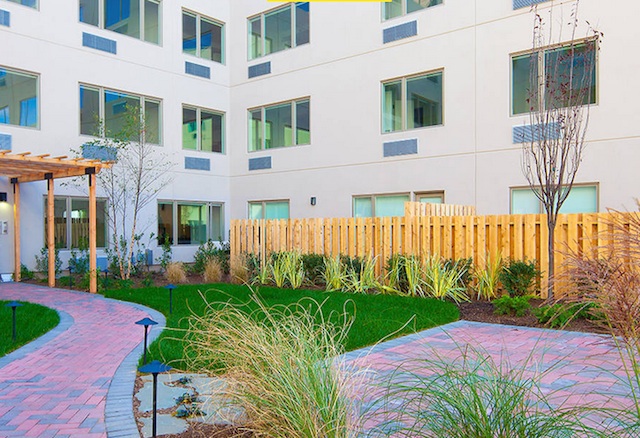 "Colony 1209 is disgusting," said Bruno Daniel of Churches United For Fair Housing, who addressed the crowd at yesterday's rally in English and Spanish. "Our home is not a new frontier. We have been working for decades to live here, and make it here. 421-a is responsible for making buildings like this possible. Any city program that builds a building like this, and has no affordable housing, and no community benefits, is a program that needs to go." 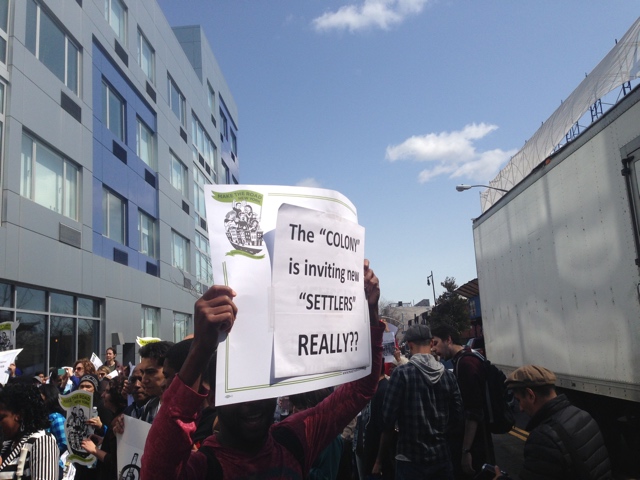 In addition to advocacy groups like Make the Road New York and Alliance for Tenant Power, the protest also drew many small-business owners, who argue that tenants drawn to apartments like Colony aren't likely to patronize their businesses.

Elvys Contreras has owned a small bakery around the corner from Colony for the last four years. He spoke to us through a translator. "I sell delicious puff pastries. I'm here today because I'm working twelve hours a day to be able to pay my rent and taxes," he said.

"The people who are moving in don't shop in the community. They don't buy products here. I was just talking to a customer of mine who lived down the block, and had to move. He came down here to look for an apartment, and they said they were going to ask him for $4,000 for a two bedroom. So this isn't accessible."

A few weeks ago, we asked Delsenia Glover, who runs the Alliance for Tenant Power, what might replace 421-a if it isn't renewed this summer. She suggested that the taxpayer money saved might instead fund Section 8, a federally-funded program that offers vouchers to supplement the cost of rent for low-income families. Still, others argue that even Section 8, which is currently facing substantial budget cuts, isn't the perfect solution, since it makes up the difference on expensive apartments, and doesn't put a damper on the ever-increasing price of living.

The Association for Neighborhood And Housing Development has suggested some amendments to 421-a, like a requirement that all buildings benefiting from the subsidy contain affordable units, and that "affordable" rents are calculated to serve a much lower income bracket.

But yesterday, Glover held firm on her organization's position: "Let us be clear with what our message is today. This is not about fixing 421-a. This is about plain old ending it."

The company that brokers Colony 1209, aptsandlofts.com, which also brokered this Williamsburg luxury building with a courtyard waterfall and continental breakfast, has not responded to our requests for comment.

#421-a
#affordable housing crisis
#alliance for tenant power
#bushwick
#Colony 1209
#gentrification
#Make the Road NYC
#original
Do you know the scoop? Comment below or Send us a Tip