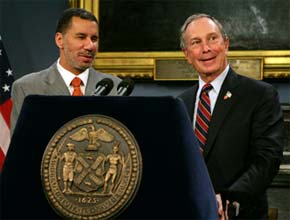 A last-minute deal was worked out between Governor David Paterson and Mayor Michael Bloomberg to save Off-track Betting, but the road to the agreement was rocky.

Bloomberg had been unhappy with how OTB provides money for the state but the city ends up subsidizing it, thanks to a formula that gives the state a cut of revenues (not profit). According to the NY Times, the city will now "earn some $4 million from the winning-bets surcharge and $3.25 million more annually as part of a three-year agreement that lets OTB air its races on two city television channels" while the state will "assume all financial responsibilities for the operation through a public benefit corporation."

The Daily News characterizes the dealings as being "Fueled by ego, turf wars and good old-fashioned screw-you politics" with people acting in "typical pass-the-buck style." And the Post reports that Paterson called Bloomberg a liar to others and here are some quotes from someone with "firsthand knowledge of Paterson's comments" on the mayor:

Day one, nothing ever changed.

Update: Paterson denies making any of the statements printed in today's Post. WCBS 880 has footage of Paterson discussing the quotes, how he feels about Mayor Bloomberg, and why he's not going to demand a retraction.

Paterson added he spoke to Bloomberg this morning--the Mayor did not believe the Post story--and emphasized how he and Bloomberg have a good relationship, in spite of disagreements.