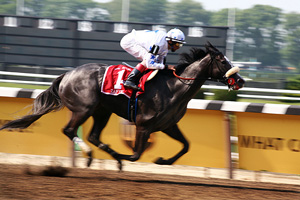 According to various sources, Governor Paterson has reached a deal to take over Off Track Betting (OTB) parlors from New York City, in order to prevent its total shutdown Despite handling more than $1 billion in wagers annually, the company lost $13 million last year.

When asked if about the possibility of an arrangement to could keep OTB open, Mayor Bloomberg was very brusque in his dismissal of the idea earlier this week. He answered, "No. What letter in the word 'no' do you not understand? It is a permanent solution. We're closing it down." He followed up by saying that no city employees should have to lose their jobs to keep open "a bookie operation."

Still, it appears that OTB and its 1,500 employees may survive the Mayor's withering disdain. Politics on the Hudson is reporting that state senator John Sabini (D-Queens) may step down from his office to head a state takeover and overhaul of OTB. He had been facing a difficult challenge from City Councilman Hiram Monseratte for his seat.

Senate majority leader Joe Bruno said that any agreement reached this afternoon would be voted on by the legislature on Monday. If the State and the City can't reach an agreement regarding keeping the betting parlors open, Nassau County Executive Thomas Suozzi proposed that Nassau OTB would be willing to take over operations of NYC OTB. Suozzi pointed out that Nassau OTB is capable of turning a profit, unlike NYC's, which is due to a state-mandated formula that allows the state to take from the city's OTB revenue, not profit.

#Albany
#betting
#bloomberg
#bruno
#OTB
#paterson
#Racing
#suozzi
Do you know the scoop? Comment below or Send us a Tip