OTB is a Longshot to Stay Open 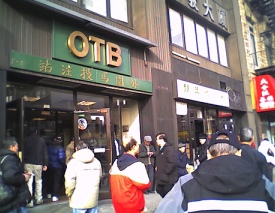 After years of warnings, the city's Off Track Betting business may be out of luck as Mayor Bloomberg said the city may pull its funding and let the gambling business close. He told the OTB Board of Directors, "The City simply cannot take dollars away from schools and hospitals to pay for a gambling operation. We have no business subsidizing betting parlors at the expense of City taxpayers, particularly at a time when we're asking all agencies to cut their budgets." And what's more, the board agreed and approved the shutdown!

The OTB, which has 1500 employees, was started in 1970 to raise revenue for the city and state. Even though it makes $1 billion a year, a "state mandated formula" requires that a portion of the revenue - not profit - is distributed to, as the city's press release puts it, "help prop up the on-track State racing industry." Bloomberg wants to the state to kick in more funding, instead of putting it on the city's shoulders. He even said a just-received letter from Empire State Development Corporation president Patrick Foye as too late, pointing out that the State Legislature ignored OTB when passing a racing bill.

The State Legislature could still act to keep OTB open. Former mayor Rudy Giuliani tried to sell OTB; he called it, "the only bookie in the world that lost money."

Photograph of a Chinatown OTB parlor by jpchan on Flickr