In an election that saw several state senate Democrats unseated by liberal challengers for their one-time alliance with Republicans, Felder, a Brooklyn Democrat who currently caucuses with the GOP, quashed a novel campaign challenge by progressive candidate Blake Morris.

Felder crushed his opponent by a nearly 2-to-1 margin, racking up 15,197 votes to Morris's 7,854, approximately 63 percent to 33 percent of the total ballots cast, according to unofficial election night returns by the New York State Board of Elections.

Felder had no election night party planned, he said, and declined to elaborate on his victory beyond a statement.

“The people have spoken loud and perfectly clear, they are voting on the issues that matter to them—safety and security, quality of life and education. I thank everyone in the 17th Senate District for coming out to vote today; your confidence and support are truly humbling. I will continue serving you and all New Yorkers faithfully,” the statement read.

According to early reports from Morris campaign staff, Felder prevailed in Borough Park and Midwood, areas that have a high concentration of Orthodox Jewish voters, a community where he enjoys broad support—Felder is Orthodox. An aggressive campaign targeting Orthodox voters, consisting of fliers, op/eds, and endorsements by religious leaders appears to have been effective.

Morris carried several precincts on the periphery of those areas, his staff said, tapping into a base of energized liberal Democrats who showed up in force across the state on Thursday. Morris had also tried to make inroads among Orthodox voters and did succeed in finding a subset of Orthodox Jews who said they were prepared to vote for a progressive Democrat—single-payer healthcare, affordable housing, and improved education were areas of agreement, Morris said. Of course, that support did not appear to be enough to beat Felder. 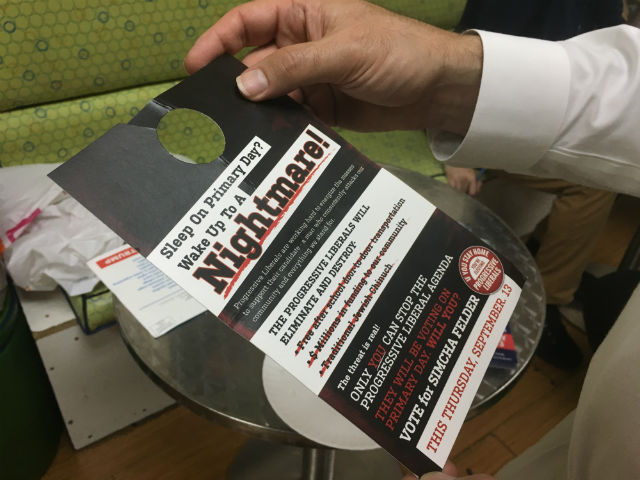 Poll sites inside the sleepy district that has been State Senator Simcha Felder’s longtime stronghold were buzzing on Wednesday. Early reports also showed that a neighboring Assembly district overlapping Ditmas Park, a power center Morris, had already surpassed the previous two primary elections’ voting totals by noon. That pattern would repeat itself throughout the district, with poll workers startled by large vote tallies.

All told, voters cast 24,027 ballots across the district in the race—more than double the 10,000 votes Morris had predicted would decide the primary. The Morris campaign beat their target of 6,500 votes by over a thousand, but those voters were drowned out in the flood of voters who mobilized for Felder.

Outside the Midwood public library’s poll site, two elderly Jewish women chatted disapprovingly about Cynthia Nixon and their plans for shabbat dinner. Inside, a poll worker confirmed that, there too, turnout was higher than usual.

Posters and op/eds published in Orthodox newspapers, as well as some reported to be posted in schools and sent home with yeshiva students, warned of the dangers of electing a liberal Democrat like Blake Morris. On the eve of the primary election, Hamodia reported an “unprecedented” show of support for Felder, with nearly 30 rabbis and yeshiva deans formally endorsing him with 12 rabbis issuing a proclamation that said voting for Felder was an obligation for religious Jews. “His success is our success, and we all have an obligation according to the Torah to support him in every possible manner,” the rabbis wrote, according to the report.

“The word is that you’re anti-Semitic if you don’t vote Felder,” said Carole Wasserman, a Morris supporter. “I’m Jewish,” she said. “We’re not anti-Semitic.”

The Orthodox community is an influential group often courted by New York politicians. Governor Andrew Cuomo sought one leader’s endorsement as recently as two weeks ago, according to one report, which he received in exchange for promises not to interfere with yeshivas in spite of ongoing investigations into substandard education there.

As one Orthodox Morris supporter, Ahuva Bookbinder, previously told Gothamist, “You can’t win an election here without talking to the Orthodox.” 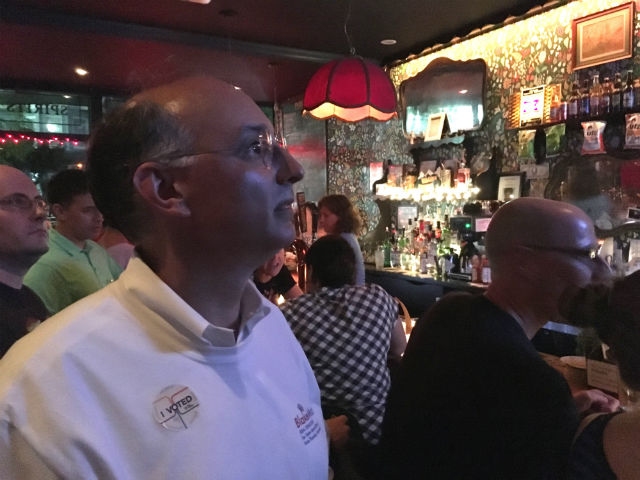 Blake Morris first received news of his likely defeat as he perched on his sofa in Ditmas Park. After seeing NY1’s ticker showing Felder ahead, Morris pursed his lips and glancing downward. “This doesn’t look good, does it,” Morris said.

Driving to his election night party with his wife, Ann, Morris seemed to internalize the defeat. He opened the car window and sighed. Ann touched his head lightly as Morris said, “We had a good run.”

Morris entered the Hinterlands Bar with his concession speech in hand, thanking supporters, and accepting an offer to buy him a beer.

Morris said he did not know if he would run for public office again, but promised to fight against corruption and injustice regardless.

“I wanted someone to stand up and say that this is not acceptable,” to have a Democrat caucus with Republicans, Morris said. “Win or lose.”

“It was absolutely worth the battle,” he said.

#blake morris
#brooklyn
#election 2018
#midterms 2018
#primary 2018
#Simcha Felder
#original
Do you know the scoop? Comment below or Send us a Tip