Even though he's been a declared mayoral candidate for months now, you couldn't be blamed for never having heard of Erick Salgado—the Democratic candidate sued Quinnipiac University this week for $1.5 million for consistently leaving him off their mayoral polls. But despite being a fundamentalist Christian who has his own Hispanic church (Iglesia Jovenes Cristianos), he does have one surprising group coming out in full force for him: orthodox Rabbis. Because they clearly don't want Jews voting for the only actual Jewish mayoral candidate at this point.

"Mayoral candidate Erick Salgado is the only known candidate in the current New York City mayoral race, committed to safeguarding our moral values," the letter, signed by 39 prominent Rabbis considered well respected in the Yeshiva world, reads. "He is opposed to the forced acceptance of Toeiva [gay marriage], which we know normalizes lifestyles that are forbidden (Assur).…Our response needs to be analogous to our response to a charity organization. It is, therefore, halachically (according to Jewish law) incumbent upon every Jew to assist Mr. Salgado’s campaign in its needs, in order for Erick Salgado to win the mayoral race. Every Jew who is not yet registered to vote must register by Aug. 16 in order to be eligible to vote in the Democratic Primary. Every Jew, registered as a Democrat at the time of the Primary, is obligated to vote for Mr. Salgado.…"

You can see the full letter of support, via Yeshiva World, below: 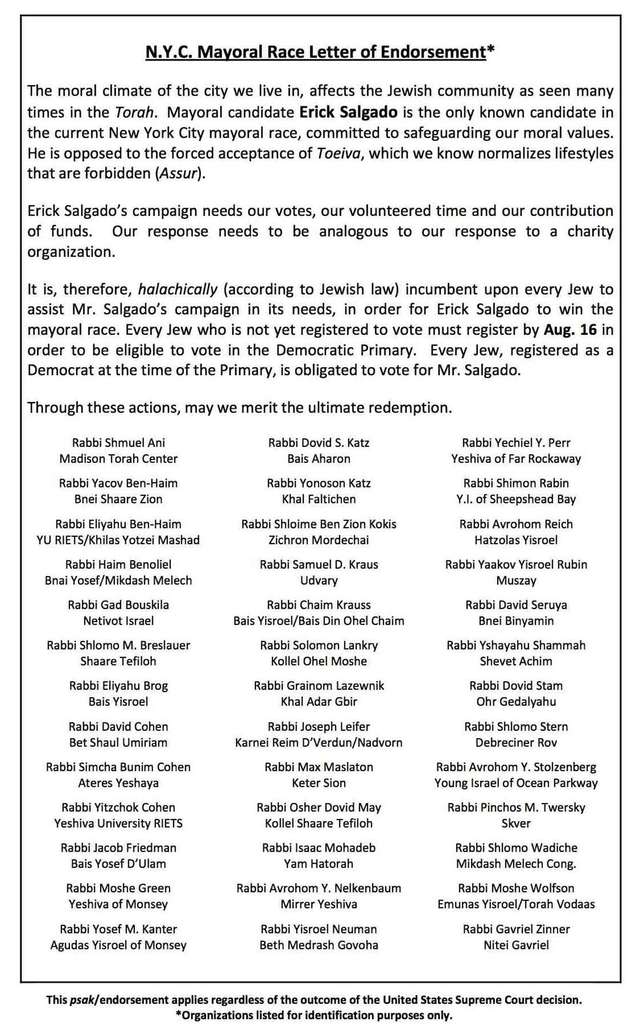 Even though he's a Democratic candidate, Salgado is much more socially conservative than all the other candidates: as the Observer reported earlier this year, the major way Salgado has made himself standout is by railing against “mortal sins,” including abortion and homosexuality. One activist and early supporter, orthodox Jew Joseph Hayon, explained his appeal: “Erick Salgado will do everything he can to make sure that the circumcision regulation will be repealed,” Hayon said. “He said he would repeal it. He’s going to be 100 percent on the issues that we care about. Most issues that Orthodox Jews care about will not affect Gentiles."

And for the record, according to a recent poll conducted by Siena Research for the NY Times, Salgado has climbed up into a virtual tie with skateboarding aficionado John Liu, and just seven points behind Weiner.