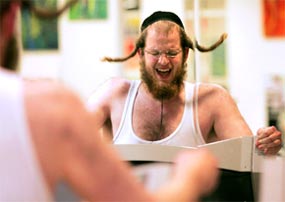 Orthodox Jewish fitness buffs are outraged that the Kosher Gym in Flatbush, Brooklyn was sold earlier this month to non-Jewish owners who plan to open the gym on Shabbos and make other non-Kosher changes to the facilities. According to the Jewish Press, gym members recently received a letter announcing the sale, for $2 million, to a "national fitness group that focuses on gender specific clubs."

Impending changes include different background music, an immodestly dressed staff and advertisements that Orthodox members are "prohibited to look at." In the letter, members were advised to "bring your own entertainment, or just don't look." And those who sought to terminate their membership were further incensed to find they will not be released from their $480 annual contracts, the Post reports. But a blog operated by the outgoing owners is trying to snuff out the controversy with a post titled "No More Blogs":

Unfortunately the situation has gotten out of control. Blogs are “popping up” all over with all kinds of allegations about Kosher Gym’s business practices. There is a massive Chillul HaShem going on by people alleging all types of things about the gym and its’ shareholders.

It’s a Chillul HaShem because they are saying for all to see (including the non religious, and non-Jews) that a place called Kosher Gym, run by religious Jews are a bunch of crooks, and other types of slurs and allegations.

The "bunch of crooks" has to do with allegations that the gym charged some members' credit cards for classes they thought were included in the original membership cost. The disgruntled members are now talking about a mass protest and a class-action lawsuit against the Kosher Gym. The way things are heating up, this could make the great Big Event Live cancellation controversy of March '08 look like a minor tiff.

#change
#jewish
#jews
#kosher gym
#lawsuit
#orthodox
#owners
Do you know the scoop? Comment below or Send us a Tip