Last year a grocery store on Lee Avenue in ultra-Orthodox South Williamsburg caught the eye of the secular world with its dress code prohibiting shoppers from sporting low cut necklines and short sleeves. Now seven grocery stores are being taken to court by the NYC Commission on Human Rights, which seeks to fine the business owners for demanding modesty from potential customers.

"There's nothing wrong with a dress code," says Clifford Mulqueen, the Deputy Commissioner and General Counsel for the Commission on Human Rights. "What the law says is that you can't advertise in a way that might make one protected group of individuals uncomfortable. When you speak about sleeveless shirts or low-cut necklines you're specifically referring to women's dress, and that may make women feel unconformable and unwelcome." 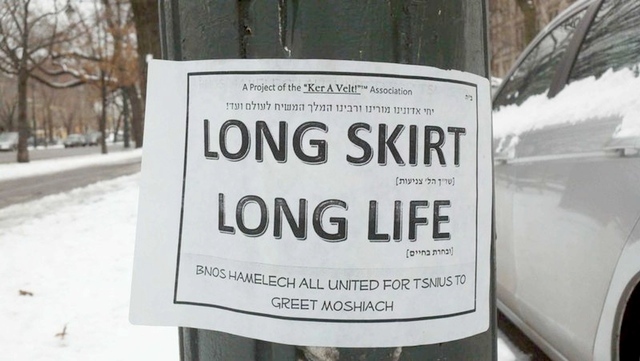 But the Orthodox Jewish Public Affairs Council argues that the signage, which has since been removed from the storefronts on Lee Avenue, is merely a request. "From our understanding of the signs, they express a wish, not a condition of service, similar to the dress code of the Court Room where this case will be heard," Yossi Gestetner, Co-Founder of OJPAC said in a statement.

And an attorney for the shops tells the Post, "Frankly, it’s very troubling that the commission thinks it’s okay for the Four Seasons restaurant to impose a dress code but not a bakery owned by a Hasidic businessman." Deputy Commissioner Mulqueen counters that "there is a difference between a dress code and something that might make a person uncomfortable. Telling men they have to wear a jacket and tie may make them feel unwelcome, but that person is not in a legally protected class."

Women are in a "legally protected class," and so the city will be bringing the ultra-Orthodox retailers to administrative court in January. "Everyone knows what the rules are and they did this knowing what the rules were," Mulqueen adds. The shopkeepers face fines of up to $5,000 each if the court rules against them in January.