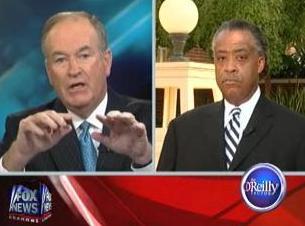 Bill O'Reilly continued to claim that he wasn't being racist when expressing his surprise that a dinner at Harlem soul food restaurant Sylvia's was extremely pleasant. Media watchdog group Media Matters distributed text and clips of O'Reilly's radio show where the conservative talking head explained, "I couldn't get over the fact that there was no difference between Sylvia's restaurant and any other restaurant in New York City. I mean, it was exactly the same, even though it's run by blacks, primarily black patronship."

And when CNN's Rick Sanchez picked up the story, O'Reilly lashed out at both Media Matters and CNN and tried to stamp some of the fallout by having his Sylvia's dining partner, the Reverend Al Sharpton, on The O'Reilly Factor last night.

After first discussing the Jena 6 case, Sharpton said he hadn't heard the tape but "What I read was surprising and disturbing." Sharpton went onto say that his words had been distorted by the media before so "I will be as fair to you as you have been to me. I will listen to the tape, and I will give my judgment." He added that he and O'Reilly go to dinner in Harlem once a year and that O'Reilly has never said anything offensive. O'Reilly kept mentioning how he picked up the tab, but Sharpton said, "You should pick up the tab - you make more money!"

O'Reilly spoke to the Washington Post about the point he was trying to make:

"Anyone who listens to the tape [of the radio show] and is fair-minded will tell you this was an intelligent conversation about race.... Aren't they supposed to be in the business of honesty over there" at CNN?

The NY Times says that Sylvia's president and CEO, H. Kenneth Woods, (son of restaurant founder Sylvia Woods), "seemed to take the publicity in stride": “I was surprised that after all these years in business he would have thought that he would’ve possibly seen something different. He’s welcome to come again.” But Assemblyman Keith Wright wondered, “In the year 2007, if he’s surprised that black folks can sit in a restaurant and have cordial conversations, where has he been all these years?”

O'Reilly claims that the far left is conspiring against him, but maybe the far left is reaching so far that it's coming around for him: There may be a backlash to the backlash!