Order of Protection Maybe Not So Effective 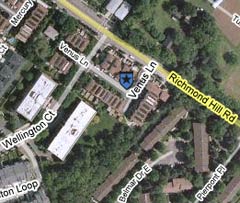 For the fourth time in two months, a Staten Island man ignored an order of protection his estranged wife had against him and drove into her home with his Cadillac. Peter Quartano, armed with a rifle, barricaded himself in the Venus Lane house he used to share with his wife Eileen and was arrested after a four-hour standoff. Oh, and the neighbors saw him "drinking on the back porch in his underwear." Nearby residents were evacuated as snipers and the hostage negotiation managed to get him out around 5PM.

His stepdaughter Dawn Scotto said that in May , Quartano "woke up and decided he would drink until whatever" and that's what prompted her mother to leave him. Shortly after, Quartano made a grave in the front lawn with, as the Staten Island Advance reports, "Mrs. Quartano's shoes...partially buried in the soil...dead flowers in the background and a statue of St. Anthony nearby." Quartano would refer to the grave and say, "This is where [Eileen Quartano will] be buried." After that, Eileen Quartano got an order of protection and the right to stay in their house. In yesterday's incident, Quartano was not at home - she was shopping in NJ.

Quartano was arrested three previous times: On the night the judge ruled he was to be out of the house (he was trying to change locks on the home), on July 5 (he tried using a drill to enter the house), and on August 24 (being too close to his estranged wife - he yelled "I'll kill her, I'll kill her," to the police).

#crime
#drinking
#nj
#police
#Shopping
#staten island
#Staten Island Advance
#The Police
Do you know the scoop? Comment below or Send us a Tip