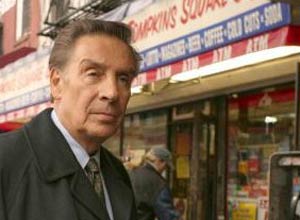 In an extremely angry letter to his stepmother, Jerry Orbach's son Chris blames her for the television detective's decision to donate the gift of sight to two New Yorkers. In a letter that was meant to be private but was leaked yesterday to the NY Post, Chris paints a nasty picture of Jerry Orbach's widow, Elaine Cancilla-Orbach, calling her a "double-dealing, lying, scheming, miserable fool."

Chris's anger stems from what he sees as his stepmother's manipulative role in the making of his father's will. Neither Chris nor his brother Tony can obtain their trusts in Orbach's $10 million dollar estate until Elaine Cancilla-Orbach passes away. All he claims to have been left is, "two sweaters, a pool cue, a few CDs and a pocketknife from the estate of one of television's best-known faces - a man who happened, incidentally, to be my father."

In regards to that face, Chris Orbach accuses his stepmother or pressuring his father to donate his eyes to charity. "Having to leave my father's deathbed so that some guy with an ice box could shuck his eyes out while they were fresh still makes me sick and furious to this day," he writes.

Elaine Cancilla-Orbach says she was "in shock" to receive the letter. She defends herself throughout the article, telling of the hard times that she and Jerry lived through before Law & Order and mentioning the $50,000 she just gave to Chris's brother Tony for the down payment of a house.

Previously on Gothamist, a video of Elaine Cancilla-Orbach at a community board meeting arguing to have a street in midtown named after her husband. (It later would be.)