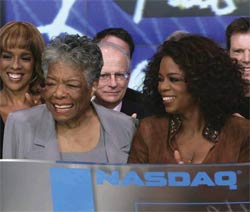 Interesting, fluffy political article in the NY Times about the diverging political allegiances of two high-profile friends. Oprah Winfrey has made no secret of her support for Senator Barack Obama - she's throwing him a fund-raiser at her California home. Maya Angelou, however, has endorsed Senator Hillary Clinton (and even appears in a video on HillaryClinton.com). Neither woman had comment for the Times.

We have to give the advantage to Obama. Angelou may have been poet laureate (during Bill Clinton's presidency), but she doesn't have the Oprah touch. Her website, Oprah.com, is actually a repository of interesting information from both Obama and Clinton: Obama told her how his mother taught him empathy and Clinton has said the best thing she's done is have Chelsea.

Now, we need to figure out how others in the Oprah's circle stand - time to dig up political endorsements of Dr. Phil, Rachael Ray, the lady who does the Secret, all the Oprah Book Club authors and Gayle King! (Gayle recently interviewed Michelle Obama for Oprah.)