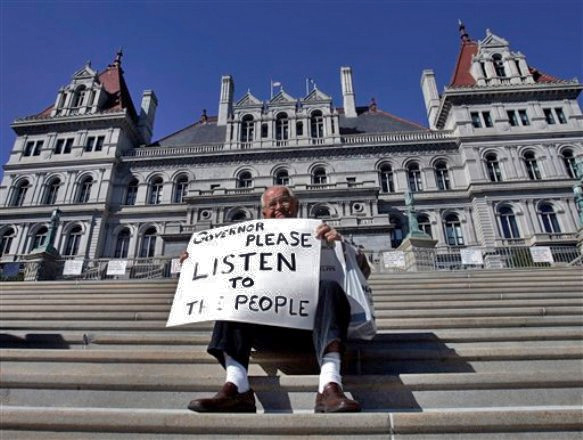 Rensselaer County Clerk Frank J. Merola is unhappy with Gov. Spitzer's plan to issue drivers licenses to illegal immigrants. As an employee of the State, he has no legal discretion over whether he can ignore the plan once it's enacted, so he's filed a lawsuit to block the initiative in state Supreme Court in Albany. In a statement explaining his lawsuit. County Clerk Frank Merola alluded to a recent public opinion poll that showed widespread opposition to Spitzer's plan licensing plan.

“New York residents have stated loudly and clearly that we are not in favor of giving license to illegal aliens and all we get from the Governor are lectures on how we are wrong, and that if we were as smart as he was, we would understand and support this policy. Well, 72% of New York residents, including myself and a vast majority of County Clerks are not as smart as the Governor and I am filing suit to prevent this travesty of a policy from being implemented.”

The State Senate also voted 39-19 to pass legislation that would overturn Spitzer's licensing plan. Any hope of that legislation making its way through the Assembly, however, is approximately nil unless Assembly Speaker Sheldon Silver decides to oppose Spitzer's plan.

Gov. Spitzer, for his part, seems unperturbed at the senate legislation, the lawsuit, the opinion polls, and the raucous protest on the steps of the state Capitol. He left a closed-door meeting with Senate Democrats saying, “It’s always good to have the conversation about why I believe what we’ve done is correct and appropriate and important." He accused opponents of his plan as being overheated and counterproductive. Spitzer feels that issuing licenses to illegal immigrants will lower insurance rates and bring undocumented residents out into the open where they will be subject to more laws and regulations.