Opossum Greets Brooklynites On Their Way To The Office This Morning

This morning a normally nocturnal opossum greeted those entering the 20 Jay Street building in DUMBO. It sat on the ledge outside of the storefront where the Neighborhoodies store is housed, and appeared healthy, albeit petrified. A witness on the scene told us:

"At 9:30 a.m., I noticed a gaggle of about six people outside the building holding their phones up. Plastered against the wall was a large opossum (looked to be somewhere around 10 pounds, about 8 inches to a foot long) which was scared shitless. People alternated between 'awwing' and being grossed out, and the creature seemed confused and nervous thanks to the large crowd that had gathered around it."

We called 311, and were told that Animal Care and Control would not come to rescue a healthy animal. Instead, the operator suggested people in this situation should Google the animal in question to find out more about it! 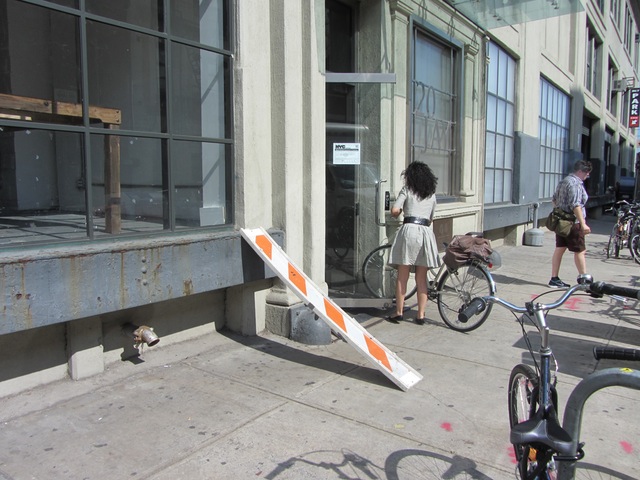 This particular opossum seems to have been chased away and/or rescued by humans. Our tipster tells us when he returned to the scene, "the construction plank was in place like a ramp and the opossum was gone. I think we can all agree it returned to its underground sewer lair and lived happily ever after." As we know, opossums are quite fond of the city's subway system. And these fascinating creatures have also inspired popular songwriters; the rock band Phish has an obscure, rarely-performed song called "Possum" in their repertoire:

#20 jay street
#brooklyn
#dumbo
#opossum
#original
Do you know the scoop? Comment below or Send us a Tip
A new Gothamist is coming! We’ve moved comments over to our beta site. Click here to join the conversation and get a preview of our new website.