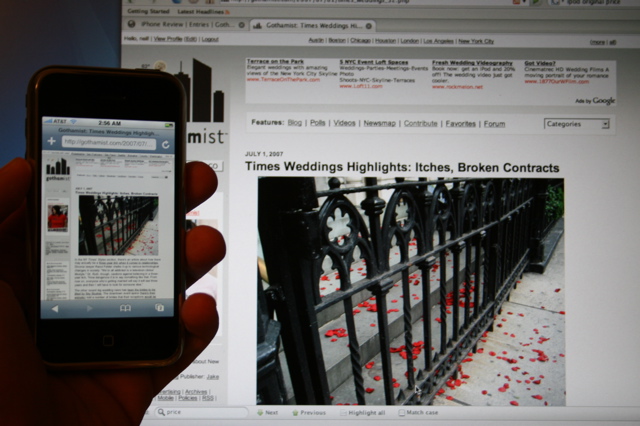 As an Apple fanatic for over the past decade, the lure of the iPhone has been tempting me for the last 6 months. When I finally walked out of the Fifth Avenue store, I wondered if this would be the answer to my phone desires. And I think it has. My Treo650 - while faithful to the last (it survived a laundry wash) had started to experience multiple crashes daily, three of them while on the line for an iPhone. It was time for something new.

When talking about the iPhone, people are quick to point out two things: 1) Its expensive price tag and 2) Apple's history with first generation products. Let me address number two first.

There are cases where bugginess can exist in early product releases (as with any product tech product - XBox 360 anyone?), I've had a number of first generation Apple products over the years - two first gen Apple Laptops, and four first gen Apple iPods (original, Nano, etc.) - and I've luckily never had any exploding batteries. Everything is still in working condition; even my iPod first gen on its original battery, which can hold quite a charge. However, mileage always varies, and if you don't have time to be part of the learning crew, then you're probably right to wait for the next version.

During my weekend playing with the iPhone, I came across a number of questions that would be answered for setup or syncing (like how to get Google Calendar on the device) by the time 2nd generation product roles around. Overall, I'd argue that the iPhone is a culmination of 12 generations of iPods in various forms; to call the iPhone a first generation product is to completely ignore the iPod's history and success, which they have built upon here.

The iPhone will set you back $499 for the 4GB model, and $599 for the 8GB, and the price is rightly a big stumbling block. But lets try to put that in perspective with two examples. A Treo650, purchased two and a half years ago, cost $600. This was for a device at the time that had an outdated OS, contained 64MB of storage, and was able to handle email and basic web browsing. When the first iPod was released in the last part of 2001, it cost $399, for 5GB storage, with only music playback (not all the fancy photo and video playback of the latest iPod generation) and a BW screen.

So, for the iPhone's $599, you're getting quite a value. The 8GB of solid state storage (the iPod currently can get up to 80gb storage at a cheaper price, but it is just a hard drive and is more susceptible to damage and failure). It has a fully functional web browser, the best iPod ever designed, a 2 megapixel digital camera, and a phone. Given everything included, it really does feel like a good investment. I've never experienced a phone OS that has been so zippy. Try in vain with your Blackberry Pearl and touch the screen to move a map or a website around. 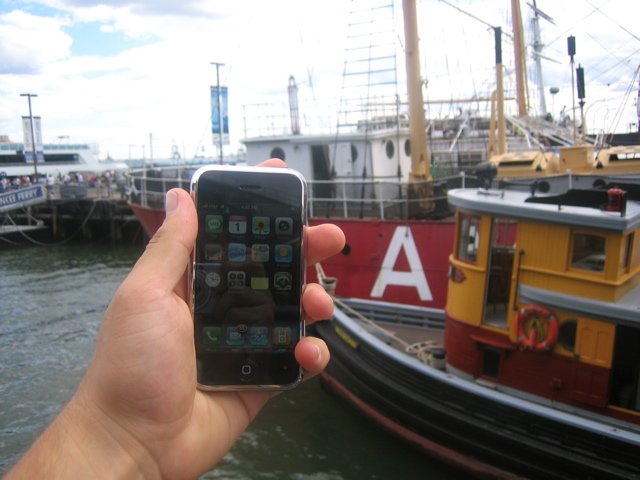 I spent the better part of this weekend playing with the device and trying a few real world NYC options out. While at the South Street Seaport, I used its Google Maps to look for a place to eat or to find the location of a nearby museum. In an unexpected boon, given the complaining about AT&T's network, I managed to get service on the Q train over the Manhattan Bridge. Before, with our T-Mobile service, that never used to happen!

One of the reasons I felt comfortable with getting the iPhone was knowing that many of my "cons" are easily solvable with a software update. Rumors are already swirling about IM support. If you're looking for perfection in a device, you'll have a hard time finding it, but the iPhone gets close to perfect as you can get. And in time it will only get better. 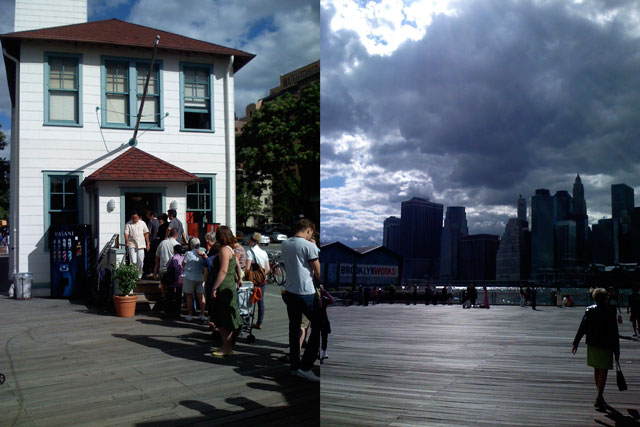 #And I
#apple
#As
#fifth avenue
#google
#Google Calendar
#history
#iphone
#ipod
#people
#technology
#When I
Do you know the scoop? Comment below or Send us a Tip
A new Gothamist is coming! We’ve moved comments over to our beta site. Click here to join the conversation and get a preview of our new website.