Opening Day At Aqueduct: "These Are Real Bad Horses Here"

“These are real bad horses here,” Angelo Romano said, looking over into the paddock where a collection of completely decent-looking horses were being fit with saddles and racing apparel. “And look at us,” he motioned to the collection of mostly older men of all different ethnicities who were massed on the grandstand, looking out at the horses. It was opening day at Aqueduct Racetrack, and the sun was out. “We’re trying to figure out animals, and we don’t even understand other people.”

Romano told me he had been coming to Aqueduct for over forty years, driving over from his home in nearby Howard Beach. I asked if he was ahead or behind after forty years of betting.

“Without a doubt behind,” he said with a laugh, and the trumpet sounded to call the horses to the gate. It was the first race of the 2014-2015 season at Aqueduct, a 120-year-old racetrack in southern Queens that has, according to the bettors, handicappers, security guards, tellers, the broke and the somewhat less broke, seen both better and worse days.

“They treat us like shit, like we’re at some kind of homeless shelter,” one bettor said, pointing to a patch of grass shooting out from behind a speaker. “They haven’t changed those speakers since the 1960s. This place is a joke.”

“The only reason it’s in business is because of the casino,” the bettor’s friend said, asking that he be identified as Harry the Horse.

Harry was referring to was the Resorts World Casino, an appendage to the Aqueduct grandstand that is the most profitable slots-only gaming casino in the nation. “This place was falling apart, still is, but now they keep it in decent enough shape so maybe some casino people wander over and place bets.”

The difference between the two operations is stark. The casino, brand new and pumping pop music through its labyrinthine gaming floor, is closer to Las Vegas than Queens. 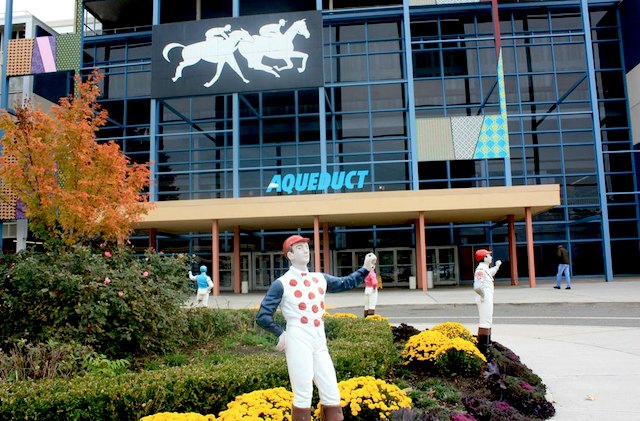 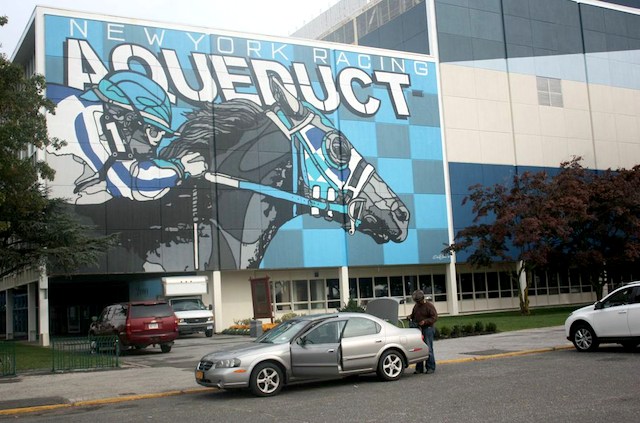 Aqueduct, with its wooden seats, tobacco-stained walls, and cavernous feel, remains as a vestige of a seedier time in New York City, before such cathedrals to vice were done in by changing tastes and corrupt management; $14 million in recent capital improvements have given Aqueduct a new scoreboard and a beautiful mural, but still, opening day didn’t really have much of a celebratory air about it.

“This place has depreciated a lot,” Angelo told me. “Used to be men in suits—now look at us.” The crowd was as outerborough as it gets. Sweat suits, crumpled hats, and an air of desperation that tends to hover around people who bet on horses.

At noon, racing season at Aqueduct officially began with an electronic rendition of the Star-Spangled Banner. On the third floor of the race track, an elderly man stood up and faced a monitor that was displaying the flag, the only soul in a vast concourse that had a maximum capacity of 768.

Aqueduct used to be one of the main jewels of thoroughbred racing, right up there with its sister tracks, Saratoga and Belmont. But a lack of investment by the state and diminishing revenue has let Aqueduct fall into a state that might be beyond repair. After 21 horses died during the 2012 season, an investigation found that many were too sick or exhausted to race, but that officials ignored the warning signs.

Still, with the collapse of Off-Track Betting in 2011, if you want to bet, you have to go to Aqueduct.

“They’re the only bookie in history that’s ever lost money,” Harry the Horse told me. “So take what you will about how OTB was being managed.” 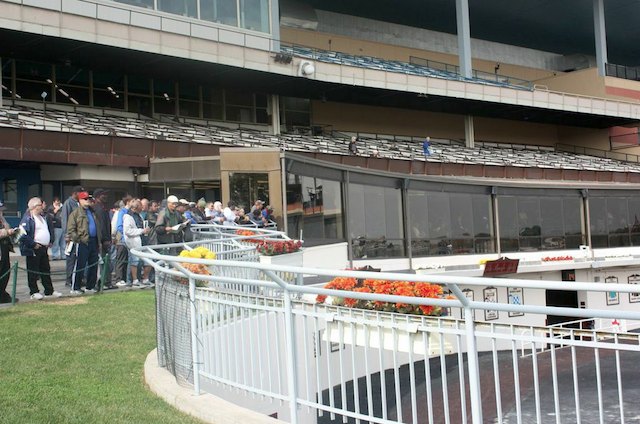 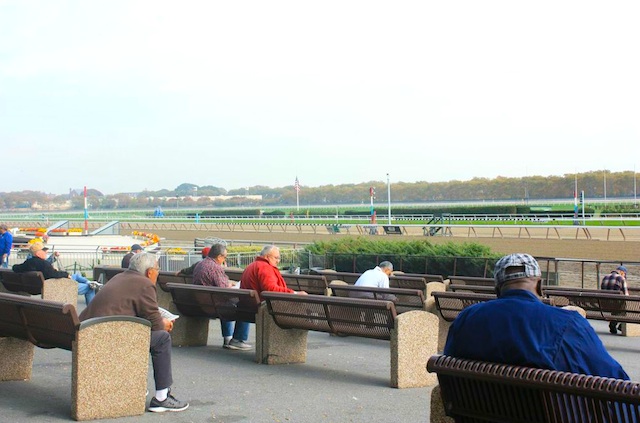 “It’s cleaned up now—it seems fresher, more alive,” Lisa Legall said. Legall is a handicapper who has made a living betting on horses. “I’ve been coming to Aqueduct for 25 years. I’ve sent my kids to college because of horse racing. It’s enough to sustain my lifestyle, and I ain’t joking.”

Legall was at the race to express her support and sympathy to jockey Luis Saez, whose brother, Juan, was killed in a racing accident earlier this year.

“Luis, we love you!” Lisa shouted, as Luis rode by on the number 2 horse. “I lit a candle for him and everything. These people, these horses, my trainers—I love them all. I light candles for all of them.”

Legall, like most bettors at the track that day, was making exotic bets—bets where you try to pick the top three or four horses to finish (called a trifecta or superfecta, an exacta is the top two). Exotic betting counts on the favorite usually being able to win, thereby leaving the guessing to second and third place. But as the race I was watching was coming down the stretch, the favorite was fading fast. The crowd emitted a collective groan and wagers were tossed onto the ground.

“Castellano, you suck!” one disgruntled bettor yelled at a jockey as he returned his horse to the paddock.

“See, that’s not very nice,” Legall said before making her way down to the jockeys to express her condolences in person. 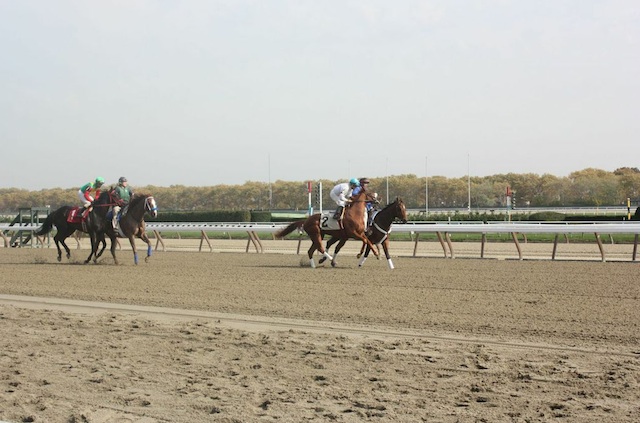 Samus, No. 6, heads to the starting gate (Max Rivlin-Nadler / Gothamist) 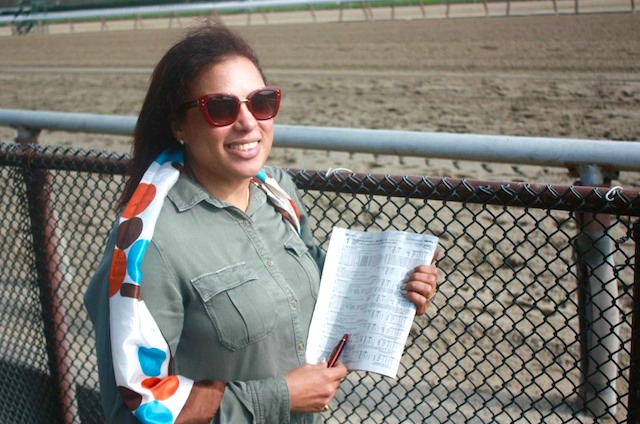 Legall was one of the few bettors I interviewed who was winning. She had tried explaining to me how to read the racing form, not read it, but understand it in a way that I would be able to handicap the horses myself. But even the most studied handicappers don’t have the kind of luck Legall has.

A older man with a Russian accent was muttering to himself, leaning against the railing to the track. “I only had $10 for today, and what am I supposed to do now, go home?”

In this weather, or perhaps just generally, home seemed an unwelcoming destination for many of the bettors, who took the warmth of the day as an opportunity to take a nap between races. Aqueduct has the longest and most unfortunate of racing seasons in the New York season, hosting thoroughbreds from late October to early April. For every beautiful stakes race held in Saratoga, many more are run in the pouring rain out in southern Queens.

Up in the second deck of the stadium I found Lisa Yanoschak and Michael Montano, two handicappers who had been with all the other serious bettors from Belmont (whose season precedes Aqueduct), and had summered in Saratoga, also following the ponies.

“I’ve never actually been to Aqueduct, but I decided to come out to opening day because Michael invited me. I’m impressed. I’ve heard some real horror stories,” Yanoschak said, complimenting the renovations.

Montano defied the advice that millionaire businessman and horse racing fan Mike Repole told the Daily News last year: “You bring a friend to Saratoga and you turn him into a racing fan. You take them to Belmont and he gets a great experience. You take him to Aqueduct and he never speaks to you again.” 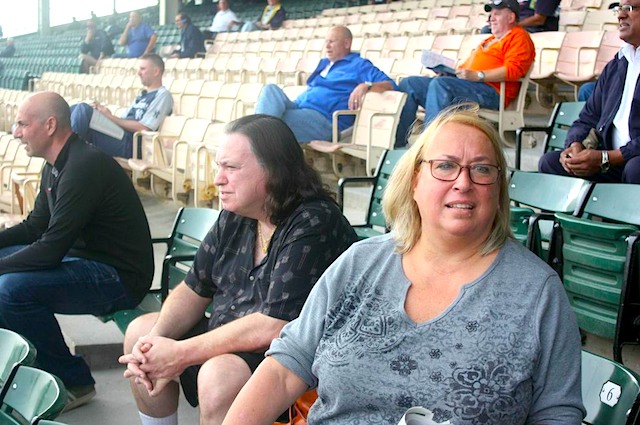 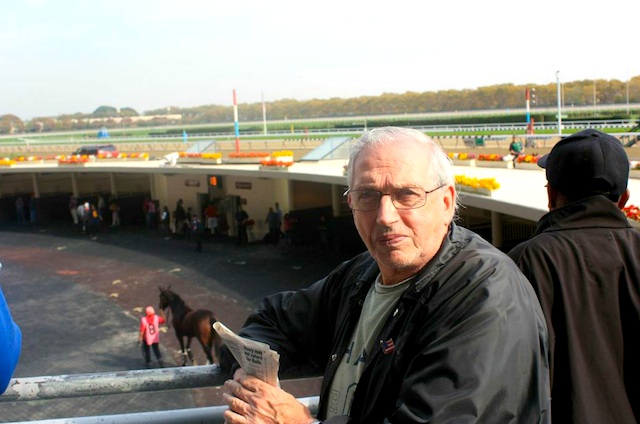 Yanoschak did seem to be still on good terms with Montano, as they watched the fourth race of the afternoon.

“You ahead or behind?” I asked.

“Behind,” they both said.

“I was ahead, but now I’m behind,” added Yanoschak.

I was behind too, and as the sun retreated behind some menacing storm clouds, I decided to head out before the skies darkened further. The change in weather seemed fitting before the beginning of another long, cruel winter at Aqueduct, where hope, or some distant, sketchy relative of hope, springs eternal.

Max Rivlin-Nadler is a freelance writer in New York. His writing has been published by The New York Times, The Nation, The New Republic, and Gawker.

#Aqueduct Racetrack
#gambling
#playing the ponies
#queens
#race horses
#resorts world casino
#longform
#original
Do you know the scoop? Comment below or Send us a Tip