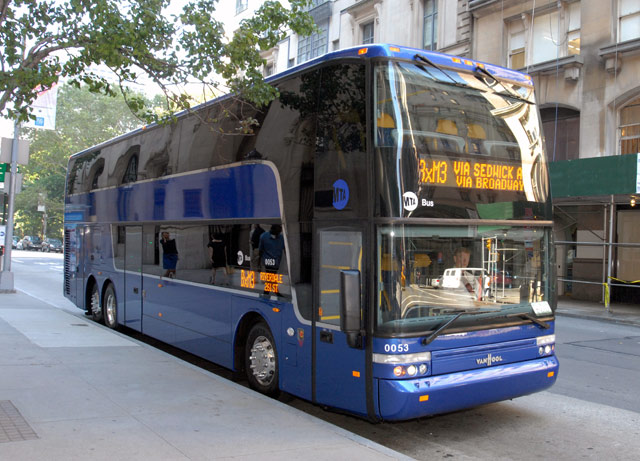 Ain't she a beaut? Making good on their promise last May, today New York City Transit officials unveiled their hotly-anticipated double-decker bus, the first municipal double-decker bus to cruise the streets since 1953. According to a press release, the 13-foot tall, high-capacity coach will run for the next 30 days along selected local and express bus routes in order to test its suitability for service.

Howard H. Roberts Jr., president of New York City Transit, told reporters at yesterday's press conference, “This is not just a show. It’s not a movement to titillate the public.” Too late Howie; color us titillated! Manufactured by Van Hool of Belgium, the D Squared has a 450 HP engine with clean air technology, runs on "ultra low sulfur diesel," and seats 81, with 59 on the upper level and 22 seats on the lower level. By way of comparison, the city's articulated buses can seat just 62 riders and cost about $900,000, while the double-decker comes with a $650,000 price tag.

The bus's low floor is designed to make it easier for seniors and customers with disabilities to board, while eliminating the need for a complicated wheelchair lift. Roberts stated that "one significant advantage is their ability to carry a large number of passengers but take up a smaller street footprint than an articulated bus.” The prototype will start out with test runs on the following routes: The BxM3 from Yonkers to Manhattan, the X17J between Staten Island and Manhattan, and the M15 limited on First and Second Avenues. According to City Room, it may also try the M5 along Fifth Avenue, if the tree pruning along the bus lane goes well.

#bus
#double decker
#MTA
#new
#nyc transit
#photo
Do you know the scoop? Comment below or Send us a Tip