Open Wide: Every Single Presidential Candidate Is In NYC Today

Maybe your calves are still sore from standing in line for Bernie Sanders's Vampire Weekend concert last night. Or maybe you're still shaking out the cobwebs from that fever dream in which Ted and Heidi Cruz drive back and forth to the grocery store in a flatbed truck stacked with cans of Campbell's Chunky soup. Perhaps John Kasich is eating (and eating and eating) in your mind's eye. Or maybe you're just squinting against the possibility of another classy display of violence when the Native New Yorker Who Shall Not Be Named rolls back into town. Sad! There's no time for dwelling in the past this Thursday, because all five presidential candidates are in NYC today, and they're all vying for your attention. Pay attention to them they are pandering so hard for you!

The big, national broadcast event is tonight's Democratic debate at the Brooklyn Navy Yard, at 9:00 p.m. The event is the hard-fought result of a lot of quibbling from both campaigns. It's the first face-off between Sanders and Clinton since March 9th in Miami.

The debate is invite-only, and each campaign has a capped number of tickets to distribute. Earlier this week we tipped you off to a sidedoor approach—call the NY State Democratic Committee at (212) 725-8825 and cross your fingers—but we imagine that trick has had diminishing returns since Monday. Luckily the event is being broadcast live on TV, is streaming on CNN.com (no need for a login), and there are going to be many, many debate-watching parties.

Earlier in the evening, all three GOP candidates are scheduled to speak at the New York State Republican Gala, a black tie fundraiser at the Grand Hyatt New York that cost $1,000 per ticket. Thousands of protesters and advocacy groups—including Millions March NYC, NYC Shut It Down and Fight for $15—have been preparing for the event for weeks.

The protest is scheduled to start at 5:30—peak rush hour—outside the Grand Hyatt, 109 East 42nd Street at Grand Central Terminal. There are more details on these Facebook event pages. You can also text @dumptrumpnyc to 23559 for on-the-ground updates.

“Trump's rhetoric is an instigation to racist, anti-migrant and misogynist violence," said KaLisa Moore of Peoples Power Assembly in a statement. "As a matter of self-defense and protection of New Yorkers, we intend to do what the city's elected so-called leaders refuse to do-and shut down Trump from spreading his hateful message." While violence has been trending at Trump's rallies in recent weeks, protesters haven't successfully shut down an event since Trump’s University of Illinois-Chicago rally. 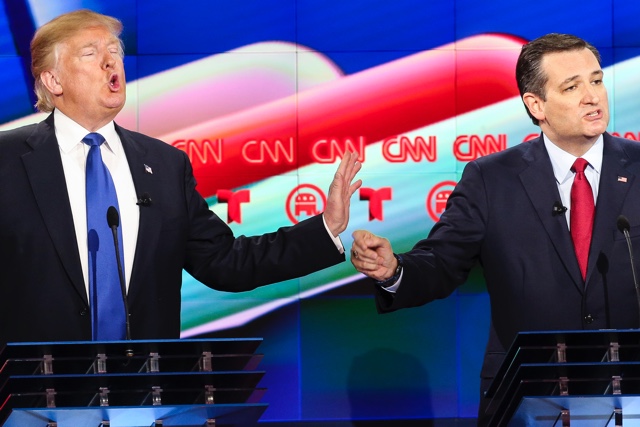 After the gala, Cruz and Kasich will schlep out of the city for back-to-back Republican Town Halls airing on MSNBC—Kasich with Chris Matthews in Jericho, NY at 7:00, and Cruz with Chuck Todd in Buffalo at 8:00. The last time Trump sat down with MSNBC, on March 30th, he suggested that women should be punished for seeking abortions. He's skipping that forum tonight.

To refresh, the polls: Clinton is still showing a double-digit lead over Sanders, with help from black voters and Democrats over the age of 45. Clinton currently has 1,758 delegates to Bernie's 1,069. There are 291 Democratic delegates at stake in New York. On the Republican side, a Wall Street Journal/NBC/Marist poll is showing Trump with 33 points over Kasich, 54% to 21%. Cruz is trailing with only 18% of the possible votes. Oh, and the Daily News endorsed Kasich.

On into the weekend, Sanders is bringing you a hangover cure in the form of a Prospect Park rally on Sunday. Gates open at noon and music starts at 3 p.m. The general admission entrance is on the east side of the park near the boathouse (RSVP here). Danny Devito, Justin Long and Grizzly Bear will be there.

With all of this excitement, don't forget to vote on Tuesday, assuming you're a Democrat or Republican (the other 3 million of you might as well just send positive vibes).

#bernie sanders
#debates
#election 2016
#gop
#hillary clinton
#Kasich
#trump
Do you know the scoop? Comment below or Send us a Tip